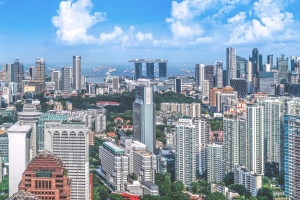 Singapore is benefiting from its status as the financial hub of one of the world’s fastest-growing regions, which is rapidly adopting digital financial services. The city-state is the best base for a fintech startup targeting the dynamic broader Asean region. Just ask Grab, which was originally founded in Malaysia but relocated its headquarters to Singapore, a move that has proven to be prescient.

In the first quarter, Grab Financial Services raised over US$300 million in its Series A round, accounting for nearly half of all Singapore fundraising during that period. Grab will use that cash to support the rollout of its digital bank in Singapore, among other things.

More modest but still important was Payfazz’s US$30 million investment in Singapore-based payments infrastructure provider Xfers, which created a new holding entity focused on the Indonesia market. In Indonesia, Payfazz has a network of 250,000 financial agents that operate in rural areas often devoid of bank branches. Customers deposit cash with agents, and that balance can be used to pay phone, electricity and other bills. Payfazz uses Xfers’ payment infrastructure to accept digital payments.

The Singapore-based cryptocurrency wallet startup imToken, which claims to be Asia’s largest cyrpto wallet provider, also received a US$30 million investment in the first quarter in its Series B round. ImToken will use the funding to develop “imToken 3.0,” a suite of services including keyless accounts and account recovery and which provides access to decentralized finance (DeFi) services.

Another key big-ticket investment was the US$17.4 million Series A round of Endowus, a digital wealth platform and adviser. The investment, led by Lightspeed Venture Partners and with participation from Softbank Ventures Asia, was one of the largest ever in a Series A round for a Singapore-based fintech.

The strong start for Singapore fintech fundraising this year follows a record-breaking 2020, during which the city-state’s fintechs raised US$1.06 billion in equity funding. According to BCG, Singapore’s fintech ecosystem recorded a CAGR in equity funding of 47% from 2016 and 2020.

More in this category: « China's crackdown on fintech giants has just begun Pakistan's fintech funding is surging »
back to top