Why does the U.S. trail Asia in mobile payments adoption? 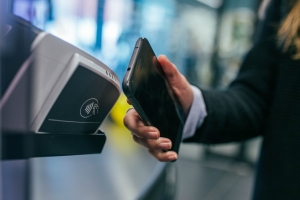 Americans are fond of their smartphones. They use them for voice communication, texting, internet browsing, photo sharing and of course streaming videos. Yet, unlike citizens across Asia, Americans rarely use their phones for banking purposes.

Data compiled by consultancy Bain & Co. show that mobile payment adoption rates in the U.S. last year were below 10%, compared to above 80% in China. The U.S.'s mobile payments usage seems especially low given the country's high level of smartphone penetration. About 81% of the U.S.'s 327 million people own a smartphone, according to Pew Research.

One of the reasons Americans aren't rushing to bank with their phones is that that they're happy with other cashless payment options. Compared to China, India and other developing Asian economies, the U.S. has much stronger credit card incumbents. About 78% of Americans have a credit card, usually a Visa, Mastercard or AmEx card. 80% of U.S. consumers used credit cards for purchases last year, according to Bain. 40% used PayPal, but mainly for online payments. Adoption of Apple Pay was just 9%.

In the U.S., many credit cards offer attractive rewards programs that help users accumulate airline miles that be exchanged for free flights or points redeemable for complimentary hotel stays. Regular use of certain cards results in a virtuous cycle: more miles and points, more free flights and hotel stays. That's why so many U.S. business travelers - really, any frequent travelers - like the rewards programs.

These programs are necessary in the United States because the credit card market is saturated. How else can the card makers maintain customer loyalty and attract new business at the same time?

In contrast, credit card penetration is relatively low in Asia, with the exception of South Korea, Singapore and Malaysia. In China and India, two of Asia's three largest economies, many consumers are going straight from cash to digital wallets that directly debit from their bank accounts. China's mobile payments totaled RMB 277.4 trillion (US$41.3 trillion) in 2018, the largest transaction volume globally by far and up nearly 37% over the previous year.

For Chinese consumers in particular, mobile payments are a way of life. Using cash in Shanghai or Beijing these days can get you strange looks in some shops. The truth is that mobile payments are more convenient in China than other payment methods. The digital financial ecosystem is impressive - the best among the world's large countries. In China, it's easier to swipe your phone for a transaction than it is to pay with a credit card.

That's not the case in the U.S. "In some cases it’s easier to swipe a credit card than to take out your digital device, hold it up to your face to unlock it, then double tap the button and hold it up to a monitor," CNBC notes in an August report.

U.S. consumers also are more comfortable with debt-based everyday transactions than their Asian counterparts, especially the Chinese. While the Chinese would prefer to pay in real time, with the money deducted from their digital wallets, Americans usually accumulate a credit card balance, paying it off a few weeks or a month later. About 55% of Americans don't regularly pay off the balance in full, according to The Street.

The most widely used payments app in the U.S. is not Apple Pay (22 million users) or Google Pay (11 million users), but the Starbucks app, which has 23.4 million users, according to eMarketer. Analysts say that American consumers use the app frequently because it earns them free coffee at Starbucks, which evidently is a more attractive perk than what most mobile payments providers in the U.S. have to offer.

Tags:
More in this category: « How Estonia discovered its digital identity How will open banking change Australia's financial sector? »
back to top
© 2007 - 2021 Kapronasia