TransferWise is on a roll 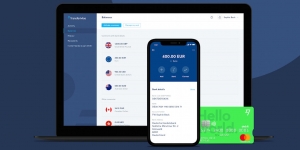 London-headquartered TransferWise continues to buck pandemic-induced economic malaise. The money-transfer firm is one of the few fintech unicorns that was profitable before covid-19 hit. With cash saved for a rainy day, it has continued to expand strategically over the past six months. TransferWise has reportedly reached a valuation of US$5 billion, a 30% increase over its previous US$3.5 billion price tag, in a secondary share sale that raised roughly US$300 million. The U.S. hedge fund D1 Capital bought US$200 million in TransferWise shares as part of the deal, according to Sky News. Other key investors in TransferWise include Merian Global Investors, Andreessen Horowitz and Sir Richard Branson.

One of TransferWise's distinguishing features has been its ability to think just big enough. Without sufficient scale, the company could never have built such a successful money transfer business. Yet it also didn't expand too quickly, instead focusing on a core online international money transfer service (available in 50 currencies), from which it takes a commission using the interbank mid exchange rate, which is fixed for two days to avoid any unpleasant surprises.

TransferWise's service is popular because it is considerably cheaper than using a bank. The company charges about 1% per transaction while many banks charge 3-5%.

TransferWise can charge customers less because its business model doesn't require the money to actually be sent overseas. For instance, if a mother in the U.S. wants to send US$1,000 to her son in the UK, she first sends it to TransferWise from her TransferWise account. The company then sends the equivalent in British pounds from a TransferWise bank account in the UK to her son's own bank account.

Overall, TransferWise has about US$2.5 billion in customer deposits, 8 million customers, and does US$5 billion in monthly cross-border transactions.

"The only thing that the banking license in Europe lets banks do is lend out the deposits that customers give them, and that’s not what our customers are asking for," co-founder and current CEO Kristo Käärmann told Tech Crunch.

Tags:
More in this category: « What went wrong at Wirecard? Will Brazil greenlight WhatsApp Pay? »
back to top