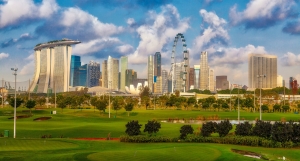 From January to September, fintechs in Singapore raised US$1.6 billion. That total includes six mega-rounds – which raise US$100 million or more - worth US$972 million. The US$1.6 billion matches the total raised during the same period in go-go pre-Covid 2019 and is up about 31% over 2020’s US$1.1 billion.

Singapore’s strength as a fintech fundraising hub is all the more impressive given the small size of its market of less than 6 million. Indonesia, which has a population roughly 48 times larger than the city-state, attracted about US$904 million in funding (26% of the regional total), while Vietnam, which is merely 15 times as large as Singapore, raised US$375 million (11% of the regional total).

The biggest deal in Singapore thus far this year has been the Series A round of Grab Financial Services, which raised more than US$300 million, accounting for nearly half of all Singapore fundraising in the first quarter. Grab plans to use that money cash to support the rollout of its digital bank in Singapore, among other things.

Other key deals this year include Payfazz’s US$30 million investment in Singapore-based payments infrastructure provider Xfers, which created a new holding entity focused on the Indonesia market, the cryptocurrency wallet startup imToken’s US$30 million Series B round,  and the US$17.4 million Series A round of Endowus, a digital wealth platform and adviser.

Although there are less than six weeks left in 2021, there could be more mega-deals ahead, based on what Sopnendu Mohanty, chief fintech officer of the Monetary Authority of Singapore (MAS), told Bloomberg last week. Mohanty said the city-state expects fintech funding to reach US$3 billion by year-end.

“Singapore, in particular, has seen the most robust funding [of any market in the region], supported by a growing number of fintechs looking to set up their headquarters here due to the strong regulatory support, opportunities for regional collaboration and a flourishing startup-focused investor ecosystem,” SFA president Shadab Taiyabi said in the report.

Overall, in the region, payments received the most funding, followed by investment tech (US$457 million) and cryptocurrency (US$356 million). Crypto funding grew fivefold over 2020, indicating the surging popularity of decentralized digital currencies in the Asean region. Singapore is well poised to capitalize on this trend provided that it continues to develop comprehensive regulations for crypto.