Pakistan’s fintech sector is heating up 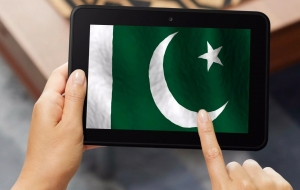 Pakistan’s fintech sector has long been a sleeper. Investors are now awaking to the significant opportunities in a country with 100 million unbanked people (the third largest unbanked population in the world), growing smartphone penetration and internet connectivity, incumbents with a weak digital game, and government policies aimed at using digital financial technology to boost financial inclusion. With just 1% of Pakistan’s US$4 trillion in annual payments currently made digitally, the sky is the limit.

Pakistan rolled out regulation of electronic money institutions in 2019, helping to pave the way for the the rise of e-wallets in the country.  rise to e-payment firms, and more recently, the creation of a digital banking framework allowed tech startups to offer a full range of banking services from payments, lending, and investments.

Pakistan’s overall startup ecosystem raised a record US$350 million in 83 deals last year, according to data compiled by Tech In Asia. 25 of them were fintech related, the largest share of any industry. That momentum has continued in 2022 with a number of key deals announced in recent weeks.

In mid-April, SadaPay announced it had raised $US10.7 million in a seed-extension round after the central bank allowed it to offer financial services through its smartphone app. As a result of the central bank’s decision, SadaPay will be able to add millions of new users. SadaPay is projected to be the fastest-growing mobile wallet in the world in the five years to 2025, according to research by the London-based fintech Boku.

Also in April, Pakistani lending platform Abhi Pvt. raised US$17 million at a $90 million valuation within a year after launching. Abhi lends to both individuals and SMEs, to which it offers financing for working capital requirements. The app takes less than 30 seconds and two clicks for a registered user to access the funds, with a flat 2% transaction fee. The funds are automatically deducted from the next paycheck.

Since its previous funding round in November 2021, the company's users increased to 650,000 from about 200,000 while it has also signed up more than 150 companies. Individuals are accessing 15% to 20% of their monthly wage through Abhi.

In February, Karachi-based chat-led payments app NayaPay raised US$13 million in a seed round led by Zayn Capital, MSA Novo and Silicon Valley early-stage investor Graph Ventures. NayaPay, which initially focused on the student and freelancer market, received a license from the State Bank of Pakistan in August 2021.

Looking ahead, Tajikstan-based fintech Alif, which began as a microcredit organization in 2014, may soon enter the Pakistan market, having applied for a digital banking license in the country. "The central bank’s initiative has gained tremendous interest from players from around the world,” Alif executive Mahmood Shamsher Ali told Pakistan's The News International in a recent interview, referring to the State Bank of Pakistan's licensing and regulatory framework for digital banks. Alif is planning to offer buy now, pay later (BNPL) services, short-term loans, B2B finance and remittances services to the Pakistani market.

More in this category: « Why is Sea Group in choppy waters? Sea Group has big ambitions for Latin America »
back to top