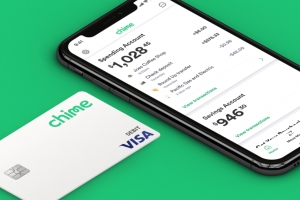 Compared to other high-profile neobanks, Chime is more focused. It is not trying to be a bank for everyone or the go-to app for digital financial services. It is not trying to conquer the world, or even a continent. Chime's niche is U.S. retail customers, specifically those earning US$30,000-US$75,000 a year. Chime offers them no-fee mobile banking accounts, debit cards and ATM access. It generates revenue by charging customers each time they swipe their debit or credit cards.

Chime offers features tailored to its target customers, such as early delivery of paychecks. The catch is that feature is only accessible for customers who sign up for direct deposit. That's one way to convince people to make Chime their primary bank.

Chime says that it is luring customers away from big incumbents like JPMorgan Chase and Wells Fargo. As of February, Chime had about 8 million accounts, half of which were direct deposit, up from just 1 million in 2018.

At the same time, Chime is not positioning itself as a neobank. “We’re more like a consumer software company than a bank," Britt told CNBC. "It’s more a transaction-based, processing-based business model that is highly predictable, highly recurring and highly profitable.”

Perhaps that's the ticket: being a digital bank in everything but name. After all, "consumer software company" (or better yet, "Software as a Service") sounds like a better long-term bet for investors than "neobank." There are many successful public companies that fit into the former category. Those in the latter typically lose money and have questionable business models.

Chime's positioning will become more important as it prepares to go public. The fact that the company is already talking about an IPO - which could happen in about a year, according to Britt - is another good sign. There is a clear exit ramp for investors.

Compare Chime's approach to Germany's N26, which was founded in the same year. N26's co-founder Maximilian Tayenthal said last year that profitability wasn't "a core metric" for his company. In Dec. 2019, N26 said it foresaw an IPO in four to five years' time - and that was before the devastation wrought by the pandemic. N26 operates in 25 different markets, including the U.S., compared to Chime, which operates only in the U.S.

To be sure, Chime's business model is not yet proven. It is unclear whether it can thrive primarily on interchange fees. But at a minimum, Chime is not overextended with mounting losses. And that makes it an outlier among neobank unicorns.

More in this category: « What Klarna gets right that most neobanks don't Nubank is in the money »
back to top