How Estonia discovered its digital identity 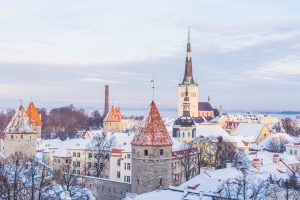 Estonia is perhaps the most connected nation on earth. Wired magazine describes the small Eastern European country as "the most advanced digital society in the world." Data compiled by the Estonian government show that 99% of Estonia's services are online, 98% of Estonians have a digital ID card and about 47% of Estonians vote online.

Estonia's high digital literacy rate can be traced in part to its lack of clunky legacy IT systems. In a September report, Tech Radar notes that Estonia invested very little in technology when it was a Soviet satellite state. After the Soviet Union collapsed in 1991, Estonia invested heavily in state-of-the-art digital infrastructure. Starting from scratch gave Estonia an advantage over countries having to build on top of older systems.

With its digital adeptness, it is no surprise that Estonia is leading the world in digital identity efforts. In 2014, Estonia launched its transnational digital identity program for entrepreneurs, e-Residency. E-residents receive a government-issued digital ID and full access to Estonia's e-services just as citizens and residents of the country do. With a secure digital identity, e-residents can operate their company - which will be registered as an EU business - online from anywhere in the world, keeping costs and hassle to a minimum, the Estonian government says.

From a fiscal standpoint, the e-Residency program is a modest success. Estonia has earned $20 million from the program since its launch in 2014, while spending about $9 million. Estonia has about 55,000 e-residents who have established 6,500 companies in the country.

In some respects, the e-Residency program has fallen short. Most notably, the original goal of 10 million e-residents by 2025 no longer looks feasible. Nor does the establishment of 20,000 companies by e-residents by 2020, a target set in 2017.

Still, the program has had an undeniable influence on global interest in digital identity. In a September report, Tech Radar notes that other governments have been inspired by Estonia's success - even if some of their efforts thus far are less ambitious.

In April, Dubai completed phase 1 of the UAE's nationwide digital identity program, integrating seven government departments. Their services can now be accessed with a single set of login details on a smartphone.

In May, Lithuania approved legislation introducing e-residency status for foreigners by 2021 based on Estonia's program. E-residency status in Lithuania would provide foreigners with a digital identity as well as open online access to services like setting up a company or opening a bank account.

Tags:
More in this category: « Why is challenger bank N26 not concerned about profitability? Why does the U.S. trail Asia in mobile payments adoption? »
back to top