A big step: China opens up its interbank bond market

On May 27th, the People’s Bank of China (PBoC) released the implementation details that will govern foreign investment in China’s interbank bond market. The new rules make it much easier for certain foreign investors to participate in Chinese bond market activities, such as borrowing/lending, futures/forwards, and swaps, including interest rate agreements.

New regulations: End of the road for P-Notes?

India's main regulator for capital markets, the Securities Exchange Board Of India (SEBI), has started implementing recommendations from the Special Investigation Team (SIT) appointed by Supreme Court of India to regulate Participatory-notes (P-notes).

On May 6th, the People’s Bank of China (PBOC) changed its policy for investors in the interbank bond market. These modified regulations will open up the market to new types of investors including asset managers, housing provident funds, pension funds and charities.

Friday, May 20th was the first day when foreign commercial banks were allowed to trade yuan on the recently opened inter-bank forex market. The first batch of the banks will be able to trade both spot RMB and derivatives.

New prohibition against investments in ‘Unreal Industries’ in China

Last week in China, the China Securities Regulatory Commission (CSRC) prohibited listed companies from raising capital earmarked for investment in the following four industries: Internet Finance, Video Games, Film and TV, and Virtual Reality. The new prohibition is an attempt to steer money into the real economy, which is defined as industries producing tangible products and services. Permissions for mergers, acquisitions, and refinancing in those ‘unreal industries’ have been halted, as well.

Alibaba vs Rakuten! Will India’s ecommerce be the new battleground for China and Japan?

After a lull in investments and a lacklustre IPO, the Indian ecommerce market is heating up once again. While China-based Alibaba had earlier invested in Snapdeal (ranked #2 in India by market share) and Paytm, it recently announced a direct foray into the Indian market, making the entire ecommerce sector sit up and take notice. Now Japan’s Rakuten seems set to follow suit into India.

Foreign banks and mutual funds moving out of India - what went wrong? 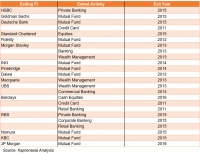 JP Morgan recently joined a long list of foreign Financial Institutions (FIs) that entered India with a lot of enthusiasm only to exit in a few years. The last 5 years have seen over 9 exits from asset management companies (AMCs) alone. India was the largest promise for some of these businesses outside of their playgrounds in the western hemisphere. So what went wrong?

China plans some new rules for the Qualified Domestic Institutional Investor program to further facilitate the cross-border investment and help the fundraising environment.

China’s Circuit Breakers ineffective against the market turbulence. Have the regulators implemented the right market measures?

It will come as no surprise to the avid watchers of the Chinese stock market that China’s start to 2016 has not been a success by any means. The CSI 300 index of blue chip stocks plummeted by 5% on Thursday 7th January, prompting the newly implemented circuit breakers to kick in and suspend trading for 15 minutes in order to remediate market volatility.

The RMB-USD exchange rate has two different values: the onshore value, determined by the PBOC at markets opening, and the offshore value, which is market-driven and used in Hong Kong. These two rates were usually almost identical, until August 2015 when a surprise depreciation by the Chinese central bank caused an even deeper depreciation in the offshore value, with the spread between the two starting to become significant, especially towards the end of the year when the yuan continued to lose value in comparison to the US dollar.

New circuit-breaker rules have been tested already, but are they a solution for market volatility?

When the Shanghai Stock Market first opened after the New Year’s holiday, everything quickly turned for the worst: a fast, large rout emerged, with the CSI300 Index losing 5 percentage points by 1 am. Then it stopped for 15 minutes, as trades were paused. After the break ended, the index kept going down, down in fact 7% on the previous trading day in just two minutes. At this point negotiations stopped again, but this time for the rest of the day.

Shanghai police have arrested 2 executives from a HK-owned High Frequency Trading (HFT) fund for irregular futures trading. This is actually the first public arrest of a non-mainland fund since the crackdown of HFT started a few weeks ago. According to the authorities, the case is still under investigation and two foreign nationals are involved in the case.

As in anything in the financial industry, there are winners and losers, although you could not be faulted for seeing more of the latter recently in China than the former. The market was up last week slightly, as it seems to be starting to shaking off the downward trend. It may not matter though, as there has been serious damage done.

Halting IPOs and quadruple capital base, a busy weekend for Chinese government as they try to stabilize the volatile market

The booming A-share market in China has attracted a lot of attention and capital over the past few months. Yet, the past few weeks have not been pretty as the market has fallen by over 40%. The government is pulling out all the stops to stop the decline.

UBS reported that it had purchased an additional 4.99% stake in its Mainland securities business from the International Finance Corporation, increasing its stake to 25% from 20%. The raised stake is a positive sign showing global investment banks are confident in China's capital markets. 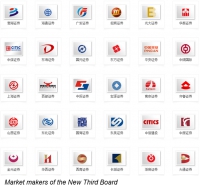 A growth enterprise board in China is a part of stock exchange that has lower listing requirements and allows smaller, often high-tech enterprises to trade shares and gain access to a transparent funding channel. ChiNext, a part of Shenzhen Stock Exchange, is the southern city's growth enterprise board, has been very successful at attracting investors and issuers. Beijing also has its New Third Board, and now Shanghai, Eastern China's innovation center, will provide a venue for small high-growth companies to raise money on the capital markets.

Want to unload that bad debt on your books? Now you can on Taobao. Cinda Asset Management, one of China’s Big 4 state-owned bad asset managers, has partnered with Taobao to sell RMB 4 billion-worth of creditor’s rights on the e-commerce company's asset disposal platform. This is seen as another potentially very successful cooperation between finance and internet industries as a large asset owner will have access to many new buyers through Taobao’s powerful channel.

The shares of three companies recently experienced an unprecedented slump, which nobody can precisely explain.

At a recent conference, the Asset Management of China (AMAC) declared that there are 713 hedge funds in Zhejiang province alone – a surprisingly large number, considering some of the statements by international experts as recent as 2014 that there are no more than ten hedge funds in China. Futures trading is also up 30% on the main exchanges in China - a strong correlation.

Xiaomi teamed up with E Fund Management to offer a new money market fund last week. The fund will be available on the wealth management app installed on the Xiaomi operating system and will be similar to products offered by Alibaba and Tencent in that it offers higher-than traditional bank deposit rates and allows nearly instant liquidity.

Globally there have been few examples, if any, of traditional financial institutions getting full use of customer big data to provide a mass-market asset management product. There are of course specialized hedgefunds and wealth management products that track market sentiment, but few beyond that. In China however, Internet giant Baidu and now, more recently, E-commerce tycoon Alibaba group are both changing the fintech landscape by how they are leveraging big data to bring new products to market.

Shanghai and Hong Kong hit new highs, but Chinese investors still stick to what they know

Chinese investors continue to join the market rally at an unprecedented pace. Records were broken as 1.6 million accounts were opened from March 23rd and March 27th and only slightly less in the following week – 1.5 million...more than the population of a small city..., well a small city outside of China.

China's bull market is a test for brokerage technology

As China's bull market continues, new accounts are being opened and trading volume is growing. One unexpected outcome is that existing capital markets technology is being stress tested and it doesn't seem to be coping that well...

With the Taiwan - Singapore now on track for year end, we are seeing a tremendous uptick in cross-border trading efforts, but instead of M&A, exchanges are focusing on trading links.

A look at Options Trading in China

China’s capital markets are maturing. Futures and margin trading had already been launched, but this week we saw equity options for the first time in China. The new derivatives trading commenced with big fanfare, with main regulators as well as top government officials present at the opening ceremony, emphasizing the importance of the event.

2014 was a good year to be a bank in China, but apparently an even better one to be a brokerage. The latest data from the Securities Association of China shows that 2014 total income for the industry was 260.3 billion RMB (Chinese Yuan), up 63% from 2013.

The Singapore Exchange (SGX) has plans to launch a FTSE China A50 Index Futures option product if / when it is approved by the China Securities Regulatory Commission (CSRC). While the new product name can be confusing for those who don’t follow Asian stock and derivatives markets closely, it simply means that investors in the region will have a hedging tool for the rollercoaster stock markets of China. Up more than 40% since November last year, the stock market dipped several times in January. Since the Shanghai-Hong Kong Stock Connect launched, the attention on Chinese A-shares has been unprecedented and additional investor interest should drive demand for exposure and hedging tools.

A bit outside of our normal commentary, but an article sheds light on how low-latency technology is important in China, but for buying train tickets.

Alipay to launch another investment product...and this time it's golden

Alibaba is yet again launching another investment product, and this time it will give its Alipay customers the option to invest in gold.

Conventional wisdom and the written history of capital markets would have it that the value of a particular stock is based on the potential of future returns in the form of dividends and the underlying book value of the company. Not ones to stick with tradition, China’s mainland investors have often defied this basic tenant of reason and developed their own ideas about what the price of any particular stock should be.

After years of bearish sentiments among Chinese investors, the Shanghai Composite Index seems to be picking up again and rises to highest level since August 2011.

Alibaba's not so subtle move into China's financial services industry took another step forward today with an additional investment into financial data and software provider Hundsun.

According to new data released by China Securities Depository and Clearing (CSDC), Chinese investors have opened 243,073 new A-share accounts in the period between November 10th and November 14th.