Assessing Capital A, the new AirAsia 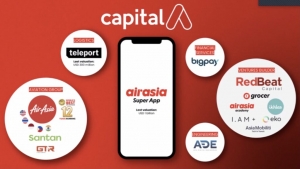 Long before the pandemic disrupted the world, Southeast Asia’s preeminent platform companies began integrating financial services into their apps for practical reasons. Their cash-burning core services, like e-commerce, ride hailing and food delivery, were failing to make money. Fintech was seen as the answer. Struggling airline AirAsia, now rebranded as Capital A, sees similar promise in digital financial services, but it still needs travel to recover for its digital services ecosystem to thrive.

In January, AirAsia became Capital A, though the AirAsia airline name remains for its airline company. The name makes the aspiring super app sound like a venture-capital firm, not a platform company. Just by looking at the name, one gets a sense that the group’s core business would appear to be financial services.

Except that is not true. Capital A has a widely used e-wallet in Malaysia called BigPay, through which it applied for a Malaysia digital banking license. BigPay and the dozens of other applicants are still waiting for Malaysian regulators to announce the winners. If BigPay wins the license, its digibanking ambitions will receive a big shot in the arm, but that’s a big “if.”

Capital A has more immediate concerns though: its ailing travel business. The airline is hardly unique; the pandemic has hit that industry harder than almost any other. Most airlines continue to suffer. But most airlines are also not simultaneously trying to reinvent themselves as banks. Will Malaysia’s central bank be inclined to award a digital banking license to a company that’s financially distressed?

We would guess no, it will not. So if BigPay wants to be a strong contender, its parent company has to stop the bleeding. Capital A’s CEO Tony Fernandes said recently that his company will return to profitability in 2023 given that demand for air travel is forecast to recover from the fourth quarter of this year. The prediction sounds reasonable – provided the pandemic does not throw the world another curveball or two as it did in 2021.

In January, the Malaysian Stock Exchange classified the erstwhile AirAsia as a “Practice Note 17,” or PN17, company, a nomenclature reserved for financially distressed firms. The exchange can delist PN17 companies if they are unable to regularize their finances within a set time frame. In November, Capital A won shareholder approval for a rights issue to raise 1 billion ringgit ($239.4 million). In December, it raised 336.5 million ringgit through a share placement.

Though Capital A is rolling out services like food delivery and ride hailing under the AirAsia super app, the high cost of competing in those segments is unlikely to help its financial condition. Those segments are already fiercely contested by much better capitalized competitors who can afford to offer customers bigger subsidies than Capital A.

Capital A’s real promise lies in its potential to bundle digital financial and travel services, which no platform company has yet done on a large scale, “digital banking for frequent fliers” or something to that effect. It has lots of user data that would be relevant and allow it to customize products, though much of the data are several years old given the dearth of air travel since early 2020. Capital A already has partnerships with many other airlines and travel-booking platform Agoda; the company says its network of hotel partners includes 300,000 properties.

If Covid-19 becomes endemic (or close to it) by late this year, Capital A could well succeed in its transformation to a travel and finance super app. If the virus remains as mercurial as before though, the company’s prospects will look much dimmer.

More in this category: « Akulaku eyes further Southeast Asia expansion Pakistan could become a big fintech market »
back to top