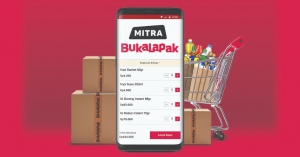 You can’t be a big platform company in Indonesia these days and not foray into fintech, not with 181 million unbanked people and many others who are underbanked. Compared to most of its competitors, Bukalapak has been more deliberate about its entry into digital financial services, but it benefits from having fewer costly business units: no ride hailing or food delivery, for instance.

Bukalapak’s first forayed into fintech in 2016 with the investment service BukaReska, launched in partnership with online mutual funds platform Bareksa. In 2020, it added the fintech business unit and mutual funds selling agent called Buka Investasi Bersama (BIB). Bukalapak is the first e-commerce platform in Indonesia to be licensed to sell mutual funds.

Without super-app pretensions, Bukalapak may be better poised to maximize synergies between e-commerce and digital financial services. To be sure, it can be very hard to make e-commerce profitable. Ask Bukalapak’s competitor Shopee about that. Bukalapak’s adjusted EBITDA losses were modest in the second quarter at US$24.2 million. Compare that to Shopee’s US$648 million. It helps that Bukalapak is focused on its home market, while Shopee operates in more than a dozen.

In the first half of the year, Bukalapak posted a net profit of US$571.7 million, a 1,220% increase from a net loss of US$51.5 million a year ago. This was mainly due to Bukalapak’s investment in Allo Bank, a fully licensed digital lender controlled by Indonesian tycoon Chairul Tanjung. The Indonesian e-commerce firm purchased an 11.49% stake in Allo Bank in January for 1.19 trillion rupiah. Allo Bank’s other key backers include Salim Group, car marketplace Carro, a subsidiary of ride hailing and food delivery firm Grab, and Growtheum Capital Partners.

Meanwhile, in early September Bukalapak its launched digital banking services in Indonesia with Standard Chartered. The service, BukaTabungan, targets both Bukalapak’s existing users and Indonesia’s underbanked segment. Bukalapak currently serves 6.8 million vendors, 14.2 million Bukalapak Partners and more than 110 million users throughout Indonesia, most of whom transact outside tier 1 cities. BukaTabungan will be a service within Bukalapak’s all-commerce platform and will leverage the international banking group’s nexus technology, a banking-as-a-service (BaaS) solution.

BukaTabungan will offer some generous subsidies to early adopters. Customers who open an account before the end of October 2022 may be eligible for bonus interest of up to 7% on savings, direct cashback worth Rp 100,000 for each successful account opened, a special referral program for Bukalapak users, and special discounts for Bukalapak and Mitra Bukalapak users.

Tags:
More in this category: « Will Sea’s austerity measures right the ship? The evolution of P2P lending in Indonesia »
back to top