The US Federal Reserve (Fed) announcement that it will continue the program of quantitative easing (QE) boosted the Asian stock market, but many now worry that this is only a temporary fix. 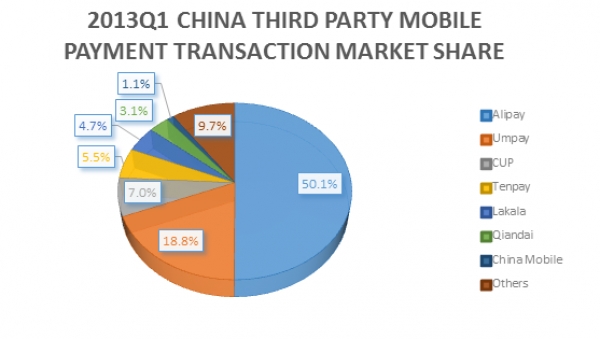 Will Bitcoin take off in China?

In February 2013, China became the second largest active Bitcoin market globally as measured by wallet downloads. This has attracted new Bitcoin based businesses to China and what could be a massive market for the developing virtual currency. An example is Bitfash, which was launched in April 2013 and became the first online shopping platform for clothes to accept Bitcoin as payment; one of its key target markets is China. However, will Bitcoin really take off in China? Can the Chinese consumer shift the value of the virtual currency as they did with gold earlier in 2013? What will the government eventually inevitably do to control the currency? It could be a potentially huge market, but will largely depend on its payment function development, the attitude of the Chinese government and the stability of Bitcoin's value.

In another of what is appearing to be a series of missteps for the HK bank in mainland China, the organisation has further alienated a key segment of their Chinese customer base by tripling basic account fees for mainland China SMEs. This comes on the heels of moving away from individual account managers and shifting any customer service for SMEs to automated help lines in 2011.

As China moves along its path of financial reform, starting with the interest rate reform and the Free Trade Zone (FTZ) in Shanghai, it is not hard to see equity investors moving towards Shanghai-based firms and FTZ-related firms.

According to the latest figure from the Shanghai Stock Exchange (SHSE) the trading volume of ETFs in SHSE increased dramatically from the beginning of 2012 to August 2013. It is quite obvious from the data that 2013 is far larger than the figure in 2012. The lowest point from this period is April 2012, when the ETF trading volume was only CNY16.232bn; The peak was in June, 2013, with a trading volume of CNY68.712bn, which is over 4 times compared to the figure at the bottom in 2012. Besides, the aggregate trading volume for the previous 8 months is CNY449.687bn, which is far larger than the whole year figure of 2012 of CNY302.658bn. As ETFs are very important components in investors’ portfolio, we estimate that there will be more ETFs launched and the trading volume could be larger as we close out 2013 and move into 2014. 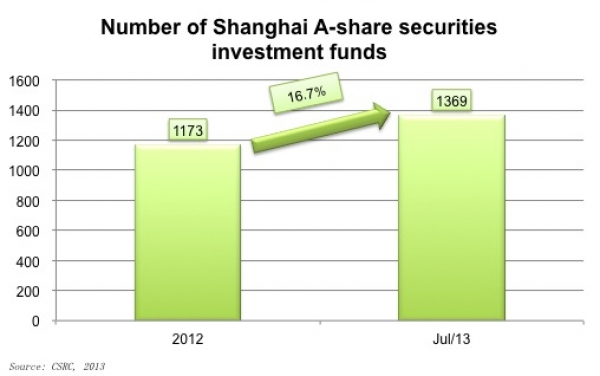 According to the latest figures from the CSRC, the number of securities investment funds for A-share market increased from 1,173 at the end of 2012 to 1,369 by the end of July, 2013. The structure of investors in Shanghai's A-share market has long been an interesting phenomenon for Chinese A-share market as individual investors comprise the major market force, which is thought to be a sign of a immature capital market. Currently, as the number of institutional investors is growing fast, it indicates to some extent that Chinese capital market is gradually developing towards the direction of a mature capital market, at least from the investor structure perspective. 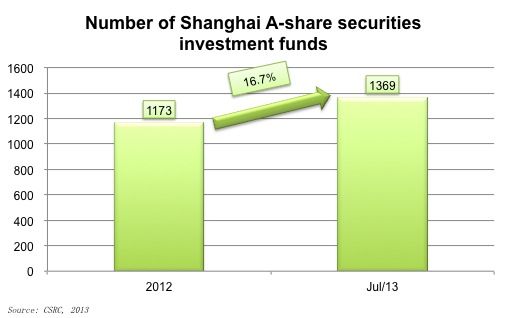 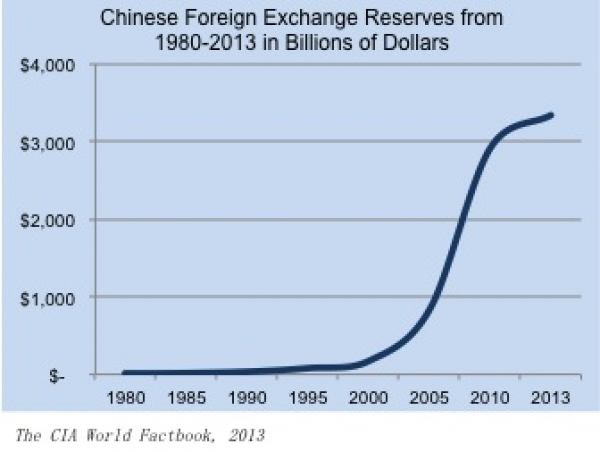 Over the last few decades, the Chinese Central Bank has accumulated massive foreign exchange reserves making it the world’s largest holder at $3.44 trillion. Furthermore the expansion of these reserves, which has accelerated dramatically since 2000, has shown no signs of slowing. Figure one shows foreign reserve levels in China compared with Japan, the world’s second largest holder, along with the United States. Figure two shows the trajectory of China’s foreign reserve levels over the last three decades, which is now over 300 times larger than in 1980.

According to a 2013 publication by Goldman Sachs, there are still major differences between US and Chinese capital markets. The most prominent difference is that capital markets in the US are much larger than China’s in all sectors except for bank credit as shown in the figure below.

The Chinese banking credit sector has expanded in recent years which is now at 128% of China’s GDP compared with 48% in the US. Thus the Chinese economy is highly dependent on bank credit, which can be dangerous for the country in the coming years.

In other sectors, there are large gaps between the size of Chinese and US capital markets with the former still lagging behind the latter. Thus, there are many opportunities for China to develop its stock and fixed income markets, along with its insurance and asset management industries. Among these, the asset management industry seems to have the greatest growth potential.

Option the Dragon: Stock Options set for launch in China

On August 6, 2013, Chinese securities companies received ‘the notice of preparing the initiating stock options full simulating trading works’ sent by the Shanghai Stock Exchange. This information implies that SHSE is already fully prepared for the launching of stock options. Although there is no clear timetable for launching the stock options, it is likely that they will appear in Chinese capital markets in 2013 or 2014.

China’s Central Bank has been rapidly shifting towards full interest rate liberalization. On July 20th, 2013, The People’s Bank of China (PBOC) announced liberalizing the loan interest rate. With this announcement, the deposit interest rate ceiling is the last variable waiting to be liberalized in China.

Chinese Small and Medium Banks Deposit Interest Rate up to 10% 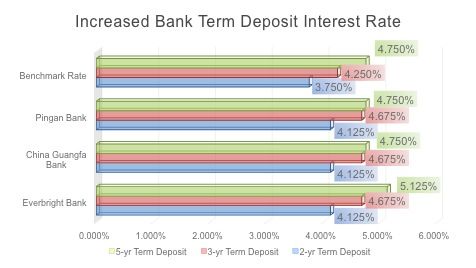 The solution for China’s ‘Cursed’ IPOs

Throughout the history of capital markets in China, public listings, or IPOs in the Chinese A-share market have been suspended 8 times; we are currently in the 8th suspension period. The modern Chinese stock market is only about 23 years old and of that, IPOs have been suspended for nearly four and a half years, which makes up almost 20% of the market's history. There is still no actual timetable to reopen the IPO market, but according to some market information, it could be possible at some time in August or September, 2013.

China is already the second largest economy in the world, however, RMB has really not been fully accepted as a payment currency internationally, which most view as a prerequisite to 'RMB internationalization'.