What State Council Has in Mind for China's Capital Markets?

State Council is China’s main governing body and its opinions provide guidance for the financial industry and allow to peek into what the government has in mind for the markets in the coming years.

After setting up its strategy as “All in Mobile E-Commerce” at the beginning of this year, Alibaba has been gradually building up its Online2Offline business - now focusing on healthcare.

The latest payment report released by PBOC shows that by the end of 2014Q1, the cumulative number of bank cards issued reached 4.39 billion. Debit cards are still the most widely used card type, accounting for approximately at 3.97 billion.

The future of mobile payment in China

The latest payment report released by PBOC shows that in 2014Q1, electronic payments kept a steady growth with the most eye-catching performance being from mobile payments.

Why Did JD.com Suddenly Decide to List on NASDAQ?

On May 22nd, JD.com listed on NASDAQ, with the timing being somewhat of a surprise for many market observers.

NFC in China: mass acceptance will probably be reached in 2015

According to the Chinese Financial Certification Association, in the major 35 cities of China only 3% of electronic (Internet and mobile) banking clients use Near Field Communication technology as a payment method. With all the convenience of the NFC technology it seems strange that the trend didn’t pick up yet. 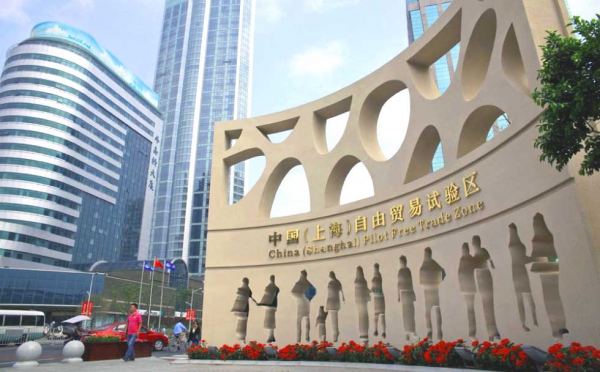 In year 2014 we expect to see numerous new policy and regulation updates on the financial reform of Shanghai FTZ. Where are we today?

Shanghai local government and Chinese central government will endeavor to expand the market functions, deepen the opening of local financial markets to foreign investors, increase the number of financial institutions in the FTZ, encourage the financial business innovation and make Shanghai more of an international financial center.

PBOC announced that, starting on March 17, 2014, the interbank RMB/USD spot price’s fluctuation spread increased from 1% to 2%. For commercial banks, the fluctuation range of RMB/USD spot price offering to the clients could be expanded from 2% to 3% from the mid-price calculated by Chinese interbank FX market. This is the third time for PBOC to expand the fluctuation range. Analysts say the expansion in RMB/USD spot fluctuation range is a clear signal that RMB will be internationalized in the near future and Shanghai FTZ is thought to be a test-bed for that. The most prominent aspect of Shanghai FTZ FX reform is the FTA (Free Trade Account). FTA is essentially a free trade bank account for Shanghai FTZ registered firms, very similar to an offshore bank account, which enables free capital flow inside the FTZ. FTA system allows both foreigners and local residents to get their money in and out through FTZ. Overall, there are mainly 3 types of FTA accounts. Local firms in the FTZ could open FTA accounts; individuals in the FTZ could open FTA accounts; foreign firms in the FTZ could open FTN accounts. As regulators are treading conservatively with hot money inflows and money laundering risks in mind, there is still no detailed timeline. However, we believe the FTA mechanism will be released in 2014 or 2015 as a momentous milestone in China's financial reform history.

In March, 2014, a PBOC official claimed that the sequence of Shanghai FTZ interest rate reform will be ‘liberalize interest rates for foreign currencies prior to RMB interest rates; free the loan rates prior the deposit rates’.

There were actions towards interest rate reform in Shanghai FTZ from the regulators. PBOC announced that from March 1st, 2014, the deposit rate of foreign currencies below the amount of USD3 million would be liberalized, which actually removed the ceiling for foreign currencies’ deposit rate. This is thought to be an important step on the road to fully liberalized interest rate reform. The next step could be liberalization of the deposit rates of the local currency, which may not only be applicable in Shanghai FTZ, but also the rest of China.

On Feb 21, 2014, PBOC released the detailed regulation on expanding the usage of RMB overseas, which simplified the process of RMB overseas usage under current and direct investment account. However, overseas RMB financial scale and usage range will still be restricted, as well as cross-border e-commerce transactions and RMB trading services.
Six banks constitute the first batch of firms applied for the cross-border RMB settlement licenses. ICBC and Bank of China helped their clients within the zone to make an overseas RMB loan; Bank of Shanghai, HSBC and Citi Bank launched cross-border RMB current account centralized collection and payment services; Bank of Communications signed the first overseas RMB borrowing service for the non-bank financial institutions.

In the future, the capital account might be opened for local and foreign investors. As Chinese reformers are relatively prudent and conservative, the liberalization process of capital accounts have been advancing relatively slowly so far. One important step in the process will be a gradual opening of commercial futures market to foreign institutional investors.

In the 1st half of 2014, a new version of ‘negative list’ will be released to update the 2013 version. Although it is not clear what items this version may include, there are two aspects which are certain. One aspect is that the contents included in the negative item list will be shortened, which implies that the restrictions on types of companies to register in the zone will be reduced. The other aspect is that Shanghai FTZ might cooperate with Hong Kong to introduce advanced practices from the city.

We also have an in-depth report on Shanghai FTZ available here.

Cracks are starting to show in the once impervious armor of China's online finance platforms as yields have dropped 20% from their highs. Ranging from about 4.7-5.6%, the current highs are much lower than the 6-8% that we saw at the end of 2013 and beginning of 2014.

Realistically though, this isn't surprising. As we have discussed before, these platforms were running on borrowed time. Whilst the business model made sense, the inter-bank lending rates and the negotiated deposits that the main China online finance platforms were able to negotiate were a bit of a perfect storm for the platforms.

Now as the banks have put limits in place on the amount of money that can be moved on and off the platform at any one time, we're starting to see the market's reaction to what has caught most banks and the regulators completely off-guard. This is unlikely to be the last push-back from the banks on these new financial products.

Yet the platforms still have over 1.45 trillion yuan (US$230+ billion) on their platforms and this is unlikely to rapidly decrease anytime soon. 4-5% is still much better than the average retail consumer could get on a bank demand deposit in most of China's main banks and the convenience can't be beat - very easy to get money on and off the platforms, although within the limits set out by the PBOC.

This is far from the end of the story thought. We expect the growth of the platforms to certainly slow and although its still a bit unclear as to what the regulation will be, further regulation and requirements from the PBOC is inevitable as we go forward in 2014. This is all the more critical as Alibaba moves forward on the IPO plans. Can the company count on that part of the business to still drive revenue?

The latest financials from Tencent Group shows that overall growth stayed strong in the first quarter of 2014 as revenue hit RMB 18.4 billion, 78% of which were value-added services. E-commerce however suffered as revenues declined 24% as compared to Q4 2013. Tencent indicated that the lagging performance was a seasonal factor; in addition Tencent has recently re-focused its e-commerce strategy.

As known, Tencent setup a partnership with Jingdong this year, acquiring 15% of the online retailer which also holds QQ wanggou and Paipai. The acquisiton is an indication that Tencent is serious about e-commerce, but they still seem to be searching for the right business model. Yet with Alibaba listing soon, Tencent will have to show rapid returns on their investment in order to keep a increasingly impatient set of investors happy. Tencent's e-commerce challenges must now be confronted to stay ahead of the game. 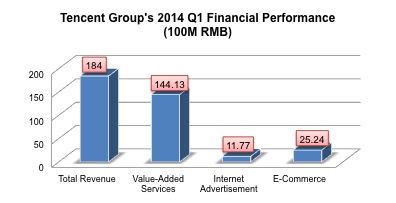 The latest figure announced by the CSRC indicates that in early 2014, the number of Chinese securities investment funds registered increased, with the total turnover declined dramatically.

Bitcoin in China, where to go?

The latest figures from online saving funds financial statements have shown that the BAT (Baidu, Alibaba, Tencent) online money funds continued expanding. The 2014Q1 data reveals that Tianghong Zenglibao, relying on the huge client base of Yuebao, lead the market and is the first online saving funds that exceeds RMB100 Billion.