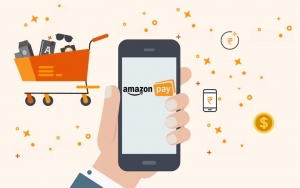 Amazon may be the world's biggest e-commerce firm and a major player in India's online shopping market, but that has not translated into digital payments dominance in the subcontinent. In fact, Amazon's share of the Indian payments market is paltry compared to Google Pay, Walmart backed-Phone Pe and Alibaba-backed Paytm. But with India's payments market expected to grow more than 300% to Rs 7,092 lakh crore by 2025, Amazon sees plenty of room to boost its market share and eventually expand into more lucrative fintech segments.

Amazon Pay saw healthy growth last year in India, buoyed by increased cashless payments use during covid lockdowns. Revenue rose 64% year-on-year to Rs 1,370 crore in the fiscal year ended March 2020. However, all the subsidies to entice customers and merchants are adding up. Advertising and promotional charges increased 55%, which helps explain why losses increased almost as much as revenue: 61% to Rs 1,868.6 crore.

If Amazon was a startup like Paytm, with financials shrouded in private markets, those figures might be worrying. But it's not. The Seattle-based e-commerce giant has a market capitalization of US$1.6 trillion, more than enough to cover the cost of developing its fintech business in India.

With that in mind, Amazon Pay India completed a US$30.9 million fundraising round in March, raising the capital from its parent entities Amazon Corporate Holdings Singapore and Amazon.com.inc, based in Mauritius.

At the same time, Amazon Pay plans to apply for a new umbrella entity (NUE) license together with ICICI Bank, Axis Bank, Visa, Pine Labs and BillDesk. NUE is a new payments platform that could compete with the heretofore dominant UPI. Unlike UPI, the NUE platform will be for-profit and permitted to charge transactions fees. NUE licensees will be able to earn interest from the balance customers hold in their online shopping accounts. Foreign companies are allowed to own up to 25% of an NUE, so they need to find local partners in India to apply for a license.

Since entering India's fintech space, Amazon has gradually increased its offerings with a hodgepodge of different services, from credit card bill payments and insurance to travel and movie ticket purchases. It even offers Indian customers the option to buy gold.

An NUE license could allow Amazon to broaden its fintech services considerably. Some possibilites include establising and operating ATMs, point-of-sale systems, and remittance services.

Tags:
More in this category: « Paytm eyes the exit ramp What is the outlook for Revolut in India? »
back to top