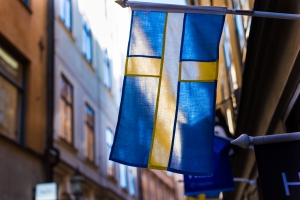 Ant Financial's interest in Klarna may also have something to do with the firm's uncanny ability to make money. Yes, that's right, a fintech unicorn that has long been known for profitability, not hemorrhaging cash. Analysts attribute the Swedish company's strong financials to its deals with many big-name merchants, such as Sweden's own Ikea and H&M. The long-term outlook for Klarna still looks sunny, even though it recently fell into the red last week for the first time in a fiscal year. Klarna recorded a 1.1 billion Swedish krona ($116 million) loss on revenues of 7.2 billion krona.

While Klarna and Ant Financial did not disclose terms of the deal, Reuters reported that Ant's stake was less than 1%. The tie-up appears aimed at strengthening the partnership between Klarna and Alibaba's international online marketplace AliExpress. Known for its "buy now, pay later" model, Klarna allows consumers to make online purchases - including on AliExpress - without providing payment details to the seller. Klarna pays for the order and invoices the buyer. The buyer has usually has between two weeks and one month to settle the bill.

Klarna is not looking for a pathway into the China market through the partnership with Ant Financial, Siemaiatkowski said. He cited China's intense competition in "app retail and payments," adding that he believes better opportunities exist in other markets.

That's a clear-eyed assessment of the situation. Ant doesn't currently need foreign fintechs to help it tap new business opportunities in its increasingly saturated home market. Ant and Tencent's WeChat Pay together control roughly 90% of China's digital payments market. In recent years, they have moved beyond payments, and now respectively offer a suite of online financial products and services.

In contrast, Ant has a light footprint in advanced economies. The presence of Alipay at points of sale across the European Union does not signify widespread adoption of its digital wallet among local consumers. Rather, it is a sign that Chinese tourists are frequent travelers to those destinations. Accepting Alipay (or its rival WeChat Pay) is smart for any merchant who wants to attract Chinese shoppers. These days, they prefer paying for transactions with their smartphones rather than a credit card or cash.

More in this category: « WeChat Pay approved to operate in Nepal How are China's fintech giants responding to COVID-19? »
back to top
© 2007 - 2021 Kapronasia