What are the implications of China's new card acquiring fees? 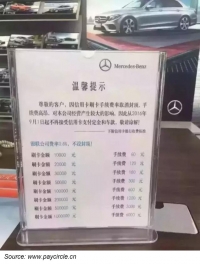 Over the past year, China's National Development and Reform Commission had been defining and refining the new payment card merchant fees. These came into effect on September 6th. The requirements have a range of implications, and are impacting the industry already.

However, it is not all good news. Although the fees were equally reduced both for credit and debit cards, the maximum fee cap was removed for credit card payments. As a result, the potential fees that the sellers of high-ticket price goods pay to banks will increase. For instance, previously the merchant fee for a RMB 200,000 car was 1.25%, but the fee was capped at RMB 80. Without the cap, a merchant will incur a RMB 1200 fee for the same car, many times more than before.

Already, there have been a number of reported cases where car dealers have rejected credit card payments in favor of debit cards or bank transfers. The image below shows a note in a car dealership listing transaction amounts and their respective fees, and saying that credit cards are not accepted as a payment method. 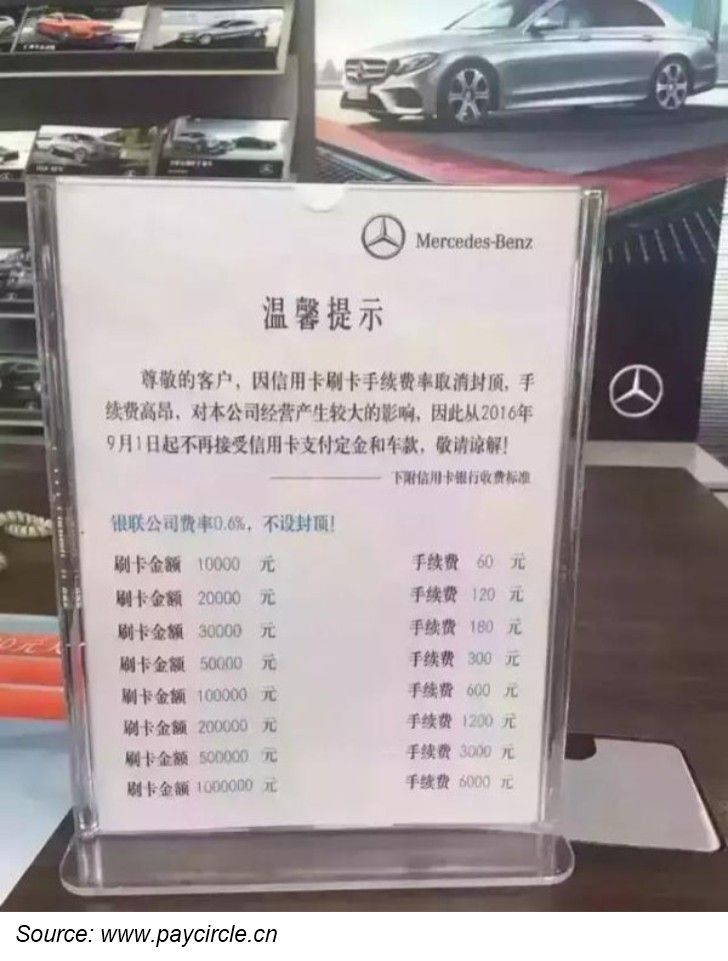 The fee cap removal is likely aimed at curbing the credit card cashing out issue - when credit is used not for buying goods, but for receiving a cash loan by using hacked POS terminals. The new card rules certainly make illegal withdrawing more expensive, since without a cap the fee paid can be quite high.

Finally, what does it mean to PSPs? The acquiring fees charged by PSPs used to be much lower than fees charged by banks (0.6% vs. 1.25% for the food and beverage industry). PSPs, therefore, are now are losing their price advantage. No official response to the fee reductions has come from the PSPs yet, but industry rumors do indicate the possibility that some response may be coming.