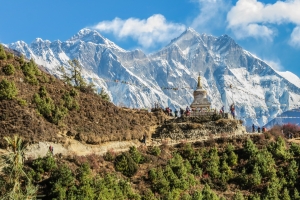 China's fintech giants have been quietly expanding in emerging markets that are participating in China's Belt and Road Initiative (BRI), which seeks to deepen Beijing's economic ties with the world. South Asia has become a geographic area of focus for Ant Financial's Alipay and Tencent's WeChat Pay. Aside from India, major South Asian nations have few domestic digital payments options, and limited foreign fintech investment. They offer Alipay and WeChat Pay a chance to gain a first mover's advantage.

That's why WeChat Pay has been determined to enter Nepal. Of course, Chinese tourists do visit Nepal, which is known for its resplendent scenery, but in the long run that market is not as crucial as local consumers and small businesses. In early February, Nepal Rastra Bank (NRB) approved WeChat Pay to operate in the South Asian country.

Unsurprisingly, WeChat Pay has a local partner: NMB Bank will provide settlement services of transactions made through WeChat Pay in Nepal. However, WeChat Pay has yet to begin operations in Nepal. Rewati Nepal, executive director and head of Payment Systems Department of NRB, told The Himalaya Times that "due to some technical reasons, WeChat Pay has not yet started providing its services in the country." A source told The Himalaya Times that technical issues were indeed holding up WeChat Pay's launch, but that the lack of Chinese travelers to Nepal amidst the novel coronavirus outbreak is also responsible for the delay. With that in mind, WeChat Pay may wait until the contagion is brought under control before formally launching its services in the country.

At the time, the central bank said that it had barred individuals and businesses from processing Alipay and WeChat payments that don't pass through a domestic bank. The transactions must also be registered with Nepal's central bank.

In a May 2019 statement, Ant Financial said that its digital wallet has a licensed local partner, Himalayan Bank Ltd., which settles transactions in Nepalese rupees by Alipay users. Merchants in Nepal have been accepting Alipay payments since early 2019, Ant Financial said.

That was then. At present, Alipay is reportedly in the process of obtaining a license from NRB to bring its services in Nepal in line with regulatory requirements.

More in this category: « Mastercard prepares for its belated China arrival Why did Ant Financial invest in a Swedish fintech unicorn? »
back to top