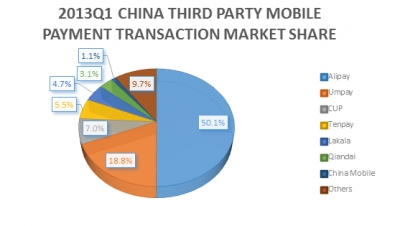 A tangled web of players

Although many of the key players in the market today have been privatized, the state-owned enterprise (SOE) legacy that many players come from has left them in very strong positions in the market. While not all still at 100% market share, SOEs like China Mobile and the 5 big domestic banks, still nearly dominate their respective industries. Similarly, regulations have prevented any big challenges to China Unionpay’s dominance of the domestic payment switching network.

The challenge for these players has been to translate their dominant position in their own industry to the mobile payments industry, which, as we’ve seen, has been challenging; nearly all of the main banks and telcos have tried to ‘go it alone’ with little success. In addition, upstart 3rd party online payment players like Alipay and Tenpay are disrupting the typical business models and rapidly gaining market share.

In China, before the retail banking system had a consolidated credit database, mobile phone statements were often used as a proxy consumer credit reports. Mobile phones were both something that nearly everyone had and were a strong indicator of the credit worthiness of their users. Today, mobile phones have reached nearly 100% penetration in China which, combined with retail outlets, has given mobile telephone operators (MTOs) an incredible base of retail customers and distribution channels.

Although these companies have access to retail customers and the distribution channels, beyond billing through monthly mobile statements, they do not directly have access to the banking technology and infrastructure to fully enable mobile payments, so have typically had to rely on banks.

As we have mentioned before, telcos and banks are somewhat challenged to launch products on their own in the m-payment space, largely because of the business and structural limitations in the industry. Many have turned to partnerships specifically around contactless payments.

It hasn’t all been successful though. From 2012-2013, China Merchant Bank (CMB) launched the SIMB card NFC mobile wallet with two of the main Chinese telecom operators: China Mobile and China Unicom. However, to date, less than 10,000 customers have adopted the NFC mobile wallet.

Nevertheless, cooperation between banks and telcos is happening much more frequently in China. One of the more promising collaborations is the ‘China Mobile Pay’ collaboration between China Mobile and China Unionpay. The platform was jointly developed and allows banks in China to connect directly to the mobile payment platform. This NFC mobile wallet could be a crucial starting point for telecom operators to find a workable business model.

At the same time, China Telecom and Bank of China announced a ‘financial services innovation’ cooperation to focus on growing m-payment, and m-payment value chain financing. Both companies hope to capitalize on the new trends and advance their solutions in the market. 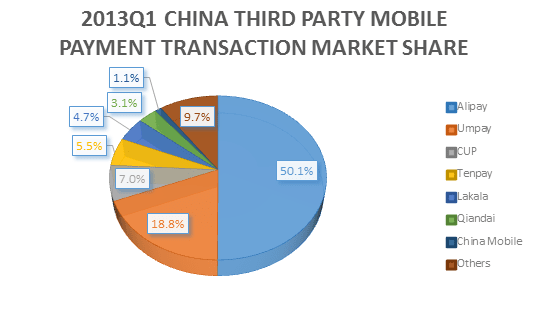 As telcos, banks and CUP have continued to test and try different m-payment business models and methods, 3rd party online payment providers have quickly grabbed a significant m-payment market share by creating their own payment platforms.

Most 3rd party online payment companies have grown out of the larger China internet behemoths like Tencent and Alibaba. These companies have been able to define new business models that do not rely on a particular bank or telco to operate which typically means some form of remote payment rather than contactless. This relative independence has allowed each player to develop their own technology and model leveraging their user base and expertise.

By 2015, mobile payments are expected to be one of the main payment channels in China. For this to happen, as each of the three main players in the m-payment market have their own challenges, they will certainly need to cooperate more to move the industry forward. With this in mind, we should continue to see jointly branded mobile payment solutions in the future, but in all likelihood, similar to mobile network standards, there will likely be a few different industry standards in China at least for the near term.

More in this category: « China’s Bankcard Consumption Value Rose by 60% in 2013 Q1 Alipay's mobile payment business dwarfed PayPal's in 2013 »
back to top