How do China's card acquirers rank? A new report published by a Chinese payments association tells us

The PBOC-backed 'Payments Clearing Association of China' published its annual report in May. We talked about some of the digital payments statistics from the report in our previous commentary, but the report also features ranking for China acquiring market, which is even more significant because such data has never been officially published before.

According to the report, in 2015, China's 153 acquiring institutions processed 56.3 billion transactions worth RMB 50.4 trillion, of which top 10 largest firms processed 67.72%. Interestingly, payment service providers (non-bank acquirers) grew their transaction volume and value by 69.98% and 55.4%, respectively.

The chart below shows that Alipay has become incredibly successful in acquiring, capturing more than 13% market share, though China UnionPay remains the market leader, the combined market share of its acquiring subsidiaries is more than 20%. Other acquirers on the list are large Chinese banks, whose combined share is almost 40%, thanks to their historically leading position on the acquiring market. 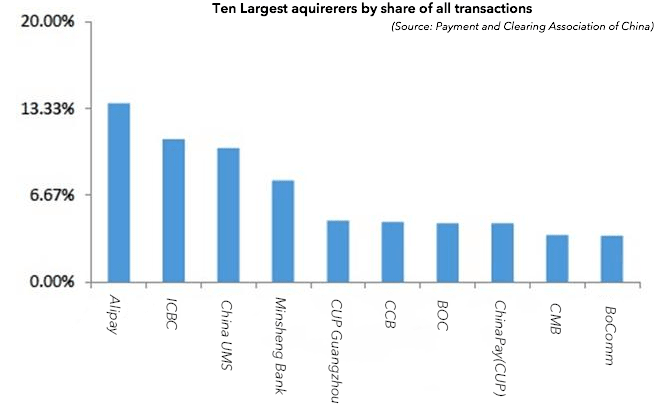 The second chart shows ranking by the number of terminals owned by acquirers. Though the published information does not specify whether the terminal numbers include all types of terminals (such as mobile phone-installed card readers) or POS-terminals only, it does provide a useful picture - it shows that China UMS is ahead, while a number of private acquirers also play a significant role. 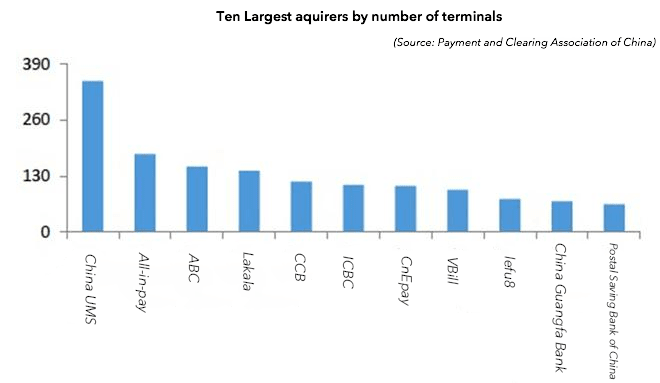