The limits of renminbi internationalization 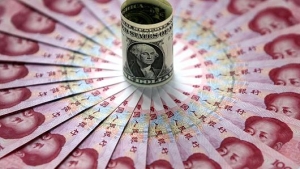 Internationalization of the yuan began in earnest more than a decade ago, with the goal of eventually establishing it as a global reserve currency. At the time, Chinese policymakers sought a larger role for China's currency on the global stage in line with broader financial reform. Today, Beijing worries about the possibility of a full-blow financial war with the United States. In this case, dependency on the dollar for international payments is a vulnerability that China must address.

While China is reducing its dollar dependency, the freely convertible euro may prove to be more useful than the yuan in picking up the slack. Data compiled by the Russian government show that the dollar's share of trade between China and Russia dropped below 50% for the first time in the quarter ended March 2020, while the euro reached a record 30%. Just five years ago, China and Russia settled 90% of two-way transactions in dollars, according to the Financial Times.

This shift to euros is significant for China's bilateral trade with Russia, but accounts for just a drop in the bucket of its overall trade. After all, Russia is not even among China's top 10 trading partners - it is No. 14. China still settles the major of its cross-border transactions in dollars.

In 2015, China launched the Cross-border Interbank Payment System (CIPS) to promote global use of the renminbi and reduce its dependency on the greenback. The results have been modest. 980 financial institutions use CIPS, compared to more than 10,000 using SWIFT. CIPS processes about US$19.4 billion daily, compared to SWIFT's US$6 trillion, Quartz noted.

Concern in Beijing abounds that the U.S. will block China's access to dollar clearing. Guan Tao, chief global economist at BOC International (China), recently told Reuters, "We have to mentally prepare that the United States could expel China from the dollar settlement system."

For now, that still seems unlikely, given its potential to batter financial markets (including America's stock market) and foment general pandemonium in the global economy. China also needs to meet targets in the phase-one trade deal, such as raising imports from the U.S. to US$350 billion annually. The payments must go through SWIFT, of course.

More in this category: « Why are Alipay and WeChat Pay facing a possible antitrust investigation? Is the Alipay/WeChat Pay payments duopoly at an inflection point? »
back to top