Swatch moves into payment-enabled smartwatches with a NFC watch 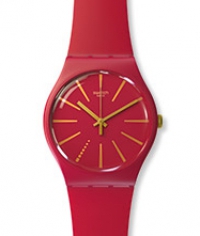 Earlier this week at The Swatch Art Peace Hotel on the Shanghai Bund, Swatch launched a new smartwatch called the Swatch Bellamy. The Swiss based company announced that it is teaming up with China UnionPay and the Bank of Communications to allow the device to be used for mobile payments at any UnionPay POS as it seems like the Bellamy is NFC-enabled.

The Swatch Bellamy will enter the $32.2 billion smartwatch market in January 2016 with the hope of reviving Swatch’s shrinking Chinese market share. The device will retail for 580 RMB (US$91) which is competitively priced against the Apple and Samsung smartwatch devices. Further, with the direct UnionPay network link, the Bellamy may have a significant advantage amongst its counterparts in the market who do not have such close relationships with Chinese payment organisations - something that even Apple is struggling with.

With many smartwatches in the market and an additional number of smartwatches yet to be released, traditional watch makers are feeling threatened by the trend, which is subsequently prompting significant changes to the strategy they undertake to remain profitable in both the western and eastern parts of the world.

Some traditional independent watch makers, for example Frédérique Constant, have introduced their own variations of smartwatches which integrate seamlessly with the traditional watch design. The Frédérique Constant offering is meant to be a blend of luxury with smart technology and includes motion tracking, sleep monitoring and exercise alerts. The idea to integrate smart technology with classic timepieces appears to work very well from both an aesthetic and a functional perspective.

Swatch is certainly moving in the right direction by entering the growing smartwatch market, which may address its lagging sales issues in China however, it remains to be seen whether consumers will favour the Bellamy over a host of other smartwatches with greater functionality - and if NFC payments actually take off. So far, NFC payments have struggled in China with the Telcos and CUP making big bets that have gone nowhere.

Unless Apple is able to jump-start NFC payments in China, the Bellamy may end up being a "classic" watch much sooner than Swatch expects or wants.