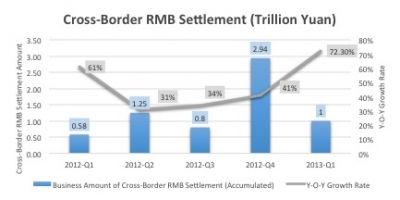 China is already the second largest economy in the world, however, RMB has really not been fully accepted as a payment currency internationally, which most view as a prerequisite to 'RMB internationalization'.

Recently, the RMB was ranked as the 13th payment currency in the world, with a slightly decreased market share from 0.74% to 0.69% as compared to March 2013. According to SWIFT, the number of countries using more than 10% of the total trading volume of RMB for their payment with Mainland China and Hong Kong has reached to 47. The number of countries using RMB for payments has increased 9% since July 2012. At the same time, the average weighted RMB payment has increased from 2% in July 2012 to 6%.

Based on the SWIFT RMB Tracker, Italy and Russia have also became the strongest adopters of RMB beside Taiwan, Singapore, and the United Kingdom. Moreover, the RMB payment value has grown 249% in France from March 2012, and it is ranked the 5th in offshore RMB payments. In March, RMB payment was 21.4% of the trading between France and Mainland China/Hong Kong compared to 6.5% last year (2012).

The increase of RMB payments implies that the RMB has accelerated its process of internationalization which fits with the government's push since 2009 to improve the RMB's acceptance as a trade currency. Recent regulations have also opened up to allow enterprise RMB cross-border settlement; all qualified China based enterprises are allowed to settle their goods exports in RMB from March 2012 so not only enterprises with export and import businesses, but also other institutions with businesses overseas can reduce their exchange rate risk.

In order to mitigate the exchange rate risk in domestic enterprises, PBOC facilitated the direct conversion of RMB with other currencies. With all other trading partners, China has signed currency swap agreements, which are worth more than 2 trillion yuan with more than 20 countries. Because of the expanding of currency conversion, more countries are willing to use RMB for payment which improves the status of RMB as a trade currency, and also speeds up RMB internationalization process. Simultaneously, more countries will adopt RMB as a payment currency.

We believe that RMB payment will continually increase as the Chinese economy grows in importance. More countries will adopt the RMB as payment when trading with China and Hong Kong in the near future, and we also look forward to see a higher ranking of RMB in the world payment currency along with the fast pace of RMB internationalization.

More in this category: « China's financial IC card market continues growing sharply Should we even care about a potential Apple - Alibaba tie-up? »
back to top