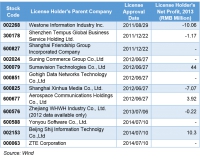 The total number of payments licenses currently stands at 269. Most of the licensed companies are private and do not disclose their financials, however, some publicly listed corporations have invested in the payment industry and a peek into their most recent annual reports allows us to know a bit more about the profitability of the payments industry in China. On one end of the spectrum, Alipay dominates the market and is very profitable. On the other, a prepaid-card company almost went bankrupt in January, which begs the question of how the industry is doing as a whole. 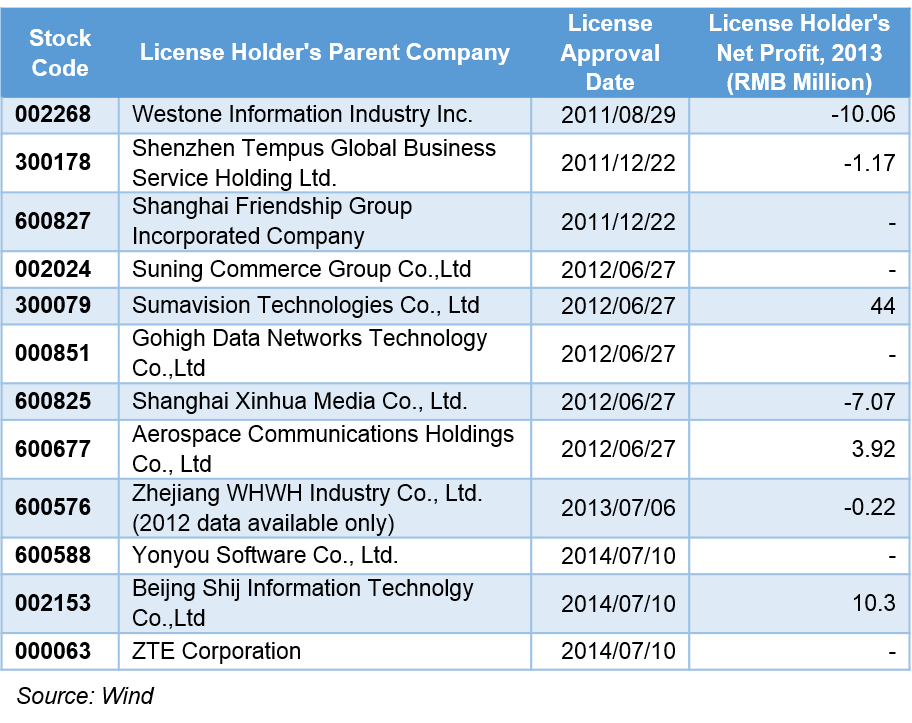 When the PBoC granted the original approvals for the payment providers, the market reacted very positively and all 12 company's stock rose on the news of the license grant. Ping An Securities estimated that a payments license was worth RMB 50 million for every company that received one. However, if you look at those payment providers that published their revenues for 2013, of the 6 that did so 3 were not making any money. For instance Westone Information Industry’s and Shenzhen Tempus Global Business Service Holding’s payments subsidiary had RMB 10.06 million and RMB 1.17 million in loss in the two years since obtaining the approval. Seems like it is such companies are struggling to find a market for their capabilities, or maybe they are still at the investment and infrastructure building stage.

Many of these companies are likely realizing that obtaining a license does not guarantee a stable income stream. In the market where the winner takes it all, competitors will have to find a niche or invest heavily before seeing a return. Some firms have already exited the industry or plan to do so, like WHWH Industry which received its license in 2013, but sold it later for RMB 90 million to a VC firm under the umbrella of the Haier Group.

Annual reports for 2014 are published in March and we will follow closely to see the last year’s performance.

More in this category: « Did a Chinese prepaid card payment company just go bust? CUP joins Alipay and Tencent to compete for medical care payments in China »
back to top