Is the Alipay/WeChat Pay payments duopoly at an inflection point? 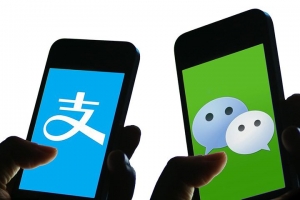 Cracks are gradually appearing in the armor of the duopoly Alipay and WeChat Pay have long enjoyed in China online payments. One after another, large Chinese internet companies are expanding their presence in that segment, from e-commerce giants Pinduoduo and JD.com to travel booking site Trip.com. The U.S.'s PayPal and American Express have also entered the market. The additional competition is long overdue and most welcome.

China's payments sector has never been especially competitive. In the pre-smartphone era, UnionPay dominated card payments thanks to a monopoly. It still does, but the ascendancy of mobile payments, a US$27 trillion market in China, has reduced the state-owned giant's clout.

Beijing ultimately traded a monopoly for a duopoly, as Alipay and WeChat came to dominate mobile payments. Together, they hold 90-95% of the market, depending whom you ask. In the first quarter of 2020, Alipay had a 55% market share and WeChat Pay about 39%, according to Beijing-based iResearch.

New entrants to the payments market will not easily unseat these juggernauts, because none of them yet has a comparably strong ecosystem. Nor could a new digital wallet swiftly achieve the type of massive offline presence Alipay and WeChat Pay enjoy. They are more ubiquitous than cash these days at retail stores and restaurants.

However, both JD.com and Pinduoduo are major players in China's e-commerce market. If either of those firms could develop a preferred e-wallet for users making purchases on their respective marketplaces, Alipay and WeChat Pay would surely take a hit.

JD has even bigger ambitions. The fintech unit of the company, JD Digits, reportedly plans to spend RMB 1.6 billion ($US230 million) to acquire a second payments license and provide more digital financial services to physical stores. JD Digits would likely get the license by acquiring Dalian Wanda Group's 99Bill Corp. A second license would allow JD to potentially expand its fintech business considerably. Its present payments license is only valid to serve merchants for card transactions within Beijing.

Trip.com became the latest Chinese internet company to get a third-party payments license with its acquisition of state-owned Shanghai Oriental Information Technology Services Co Ltd in late September. Trip.com needs the license to comply with Chinese clearing and settlement regulations. Previously, it collected payments through Alipay and WeChat Pay, while clearing the payments itself. With the acquisition of Shanghai Oriental Information Technology Service's license, Trip.com can clear through UnionPay and NetsUnion before passing on the money to merchants.

The payments license should help boost Trip.com's business as China's travel industry recovers. China's Tourism Research Center forecasts that 550 million trips will be made during the eight-day Golden Week holiday, down about 30% from 2019, and that tourism revenue will decrease 26% this year to RMB 4.8 trillion (US$679.8 billion).

More in this category: « The limits of renminbi internationalization Illegal online gambling proliferates in China's digital economy »
back to top