Has the ship sailed for U.S. credit card companies in China? 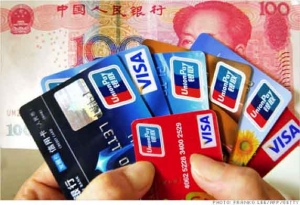 One of the great ironies about China for multinational firms is that they feel they have to be there, but the gatekeeper doesn't always let them in. This paradigm is especially evident in the financial services sector, where foreign firms control less than 2% of the market 18 years after China entered the World Trade Organization and promised to dismantle trade and investment barriers.

U.S. credit card companies have watched helplessly as China's own UnionPay has grown into a national champion thanks to its virtual card-payment monopoly. U.S. payment networks have only been able to issue co-branded cards with UnionPay that can be used exclusively outside of China for foreign-currency transactions. Beijing officially terminated UnionPay's card-payment monopoly in 2015, but by that time, the company already had effective control of China's massive card market, estimated at roughly 675 million.

But somehow, hope springs eternal. When Beijing announced the monopoly would end, some observers declared (once again) that the time had arrived for U.S. credit-card companies in China. Scott Valentin, then managing director of FBR Capital Markets, forecast "huge opportunity."

Prior to the start of the Sino-U.S. trade war, Beijing did not move to welcome U.S. credit card firms. It was only after U.S. President Donald Trump, the self-proclaimed "Tariff Man," slapped levies on billions in Chinese imports that Beijing grudgingly approved American Express's application for a clearing license. Naturally, approval comes with a catch: The U.S. cardmarker must work with a local partner to build a payment network for domestic RMB transactions. AmEx decided a forced joint venture is better than nothing at all, and is working with local fintech firm LianLian. The JV is called Express Company.

"As a joint-venture, we will bring together the power of American Express’ global brand and network, and the local knowledge, resources and experience of LianLian," Express Company CEO Walter Liu said in a statement.

With its high-end positioning, AmEx may be better poised to develop a niche in China than Visa or Mastercard, analysts say. “It’s a luxury brand and can make use of its unique selling points - its reward schemes – as compared to Visa or Mastercard, which can only really offer payment functionality that Chinese consumers already have access to via UnionPay," GlobalData analyst Sam Murrant told Inkstone in January. For any of the companies, their profitability is such that even a small fraction of a percentage of marketshare would mean significant revenue for the companies.

Still, it will be an uphill climb for AmEx. Chinese consumers increasingly settle transactions with their mobile phones rather than plastic. In 2017, credit and debit cards accounted for roughly 15% of online payments in China, while e-wallets like AliPay and WeChat had a 62% market share, notes a February report by The Financial Times.

In 2018, about 890 million Chinese used mobile payments. Alipay had about 1 billion active users, while WeChat Pay had 900 million. Chinese consumers prefer mobile wallets that withdraw cash directly from their bank accounts to charging transactions with a card that accumulate as debt.

Reportedly, the Trump administration is pushing Beijing in trade negotiations to expedite the entry of AmEx, Mastercard and Visa into China. Given the strength of domestic firms in the China payments market, those efforts may well be too little, and much too late.

More in this category: « Mastercard still thinks it pays to be in China Tie-up with Tribe Payments allows UnionPay to issue credit cards in Europe »
back to top
© 2007 - 2020 Kapronasia