News is that the China International Payment System (CIPS) is ready and selected 20 banks are about to start testing, among which seven are subsidiaries of foreign banks. The new system was developed by PBoC and aims to be a significant improvement on the current way companies make cross-border RMB payments.

Under the existing scheme payments have to pass through offshore clearing banks in centers like Hong Kong or London. If payments go directly to China and eschew these centers, transactions will be completed faster and at lower cost. Also, the working hours are limited now, so CIPS will likely be able to handle payments when counterparties are active in other time zones. Furthermore, it is widely expected that CIPS will feature ISO-compatible standards, connecting domestic-standard China National Payment System (CNAPS) to the world.

The CIPS has been somewhat controversial. Plans for the system have been in the works for nearly a decade as part of China's domestic payment system refresh. The government must have felt that the system either wasn't ready before or would not be able to capture any meaningful marketshare. One wonders what is different this time. Through several conversations with SWIFT, it also appears that they were also largely kept out of the loop and decision making process, although certainly not for wont of trying.

Currently all cross-border payments, even in RMB, are done via the SWIFT network in China. Will the new system be enticing enough to persuade companies to make the switch to the solution from China’s central bank? Or maybe the switch will actually be required if the regulator makes it mandatory for all cross-border RMB payments to be routed via its system? This is possible, especially in the light of recent turn to domestically-developed technology in banking. However, we don’t think that should be a concern in the near term as RMB internationalization has a higher priority at this point, and RMB wider use is desired by economic planners, no matter via which network.

Another question worth pondering is what business model will be chosen (if any)? SWIFT is a for-profit organization and charges banks both for connecting to its network and for using its software. CIPS is developed by the Central Bank and might have different priorities, such as the aforementioned RMB internationalization, thus providing the network for free. The currency is doing fine – it overtook Canadian dollar to become world’s fifth most used currency in December 2014. In any case, the success of both RMB and the new payment system depends on each other. And in this chicken and egg problem the new, upgraded version of chicken is about to be rolled out. 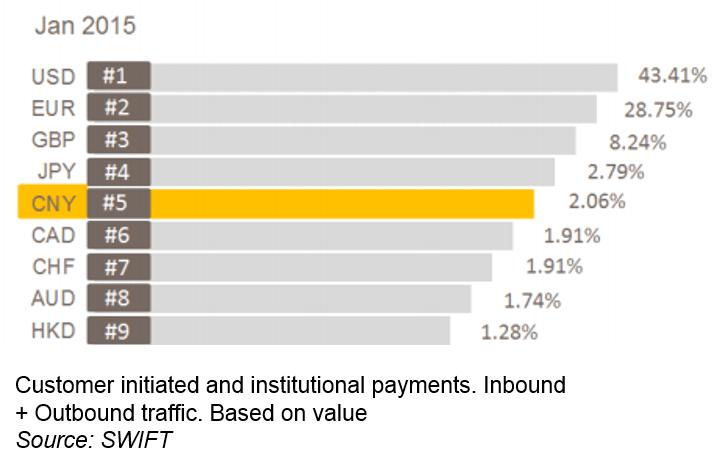 More in this category: « Why the new China cross-border ecommerce platform by SF Express might be a game changer It's looking like Apple Pay will be launched in China in April »
back to top