June 25th 2018, Ant Financial launched its E-wallet cross-border remittance service based on blockchain technology. Customers using Alipay HK can transfer money in real time to another E-wallet Gcash based in the Philippines.

The first transaction completed in three seconds, which may have taken days in the past. In the press release, Ant financial described the new system as low-cost, transparent, secure and fast. As it is powered by blockchain technology, all parties participating in the transaction will be notified as soon as a user submits an application. Standard Chartered Bank is the first bank supporting the initiative. It will handle all the related clearing in the process. 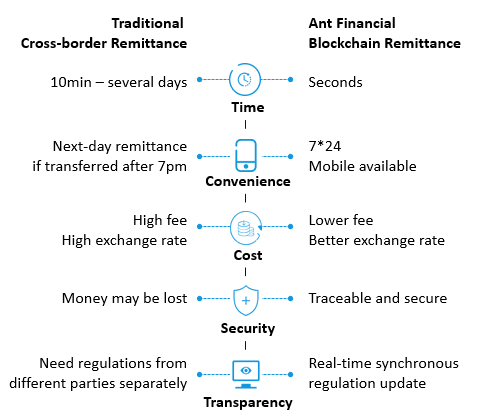 The cooperation between Alipay HK and Gcash is marked as the first connection among E-wallet overseas transactions based on the blockchain. Blockchain as the backing technology has been linked with overseas remittance service for a long time. Ripple started using crypto coins in 2004. However, it did not get much attention until 2012, when OpenCoin launched a new version of the idea via Ripple. XRP was then issued to create liquidity through overseas transactions. However, Ripple’s crypto system has not been accepted by any major countries around the world. Government supervision is the biggest problem for Ripple to make more impacts globally.

The new development is expected to benefit the big Filipino community in Hong Kong. Together with India and China, the Philippines is one of the biggest remittance receiving countries in the world. Last year, it received over $33 billion of remittances. However, the process was not easy for the remitters. Normally they have to queue for hours and fill out different forms. With the connection between two E-wallets, the consumers can complete the whole process in seconds on their mobile phones, which is a significant improvement towards real-time and seamless experiences.

Besides the use of blockchain technology, the solution is another step for Ant Financial to build an international payment network with its Alipay wallet. In the future, they plan to link Alipay with more and more E-wallets based in different countries, as well as more banks. The service aiming at Filipinos in Hong Kong may only be a start.

More in this category: « Technology brings more imagination to financial service – from China Fintech to Techfin Alipay ups its security to prevent scams »
back to top