Should we even care about a potential Apple - Alibaba tie-up?

Alibaba and Apple were in the same sentence quite a bit this week as rumours floated about a potential Alipay / Apple Pay tie-up. Beyond a potentially very unique name for a new payment service, what would a potential partnership bring to the table for the companies and consumers?

Fundamentally, Apple has everything it needs to enter the Chinese mobile payments market with its new flagship NFC-enabled iPhone 6...well, almost everything - a payment processor and regulatory approval would be nice. Despite still “working out details”, Apple supposedly entered into an agreement with China Unionpay (CUP) in May 2014 that would enable Apple users to make NFC payments on over 3 million China Unionpay point-of-sale (POS) terminals in China. Little has been made public about the partnership, but it's safe to assume that CUP, the government controlled, and only (!) bank card payment processor in China would want to leverage the investment that they have made in the NFC terminal upgrades and would likely see Apple Pay as a catalyst for driving the industry forward. 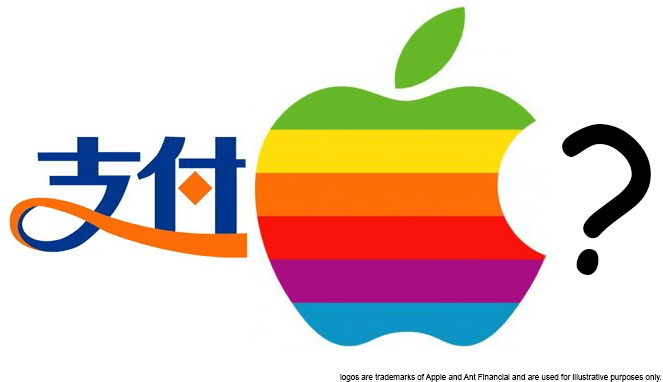 On the other hand, Alipay has so far decided to go it alone and avoid working with CUP by setting up its own CUP-independent POS and NFC network. Although the POS network with QR and bar codes is going along well, (or at least was until QR codes were banned by the People's Bank of China (PBOC)), Alipay's NFC POS roll-out has been a bit more challenging. CUP has been and will likely be the #1 POS terminal that a store has, if they have any. For CUP, that means an existing terminal upgrade to enable NFC. For Alipay, it means an entirely new POS network. Not cheap, even when the parent company is flush with newly found IPO financing.

However, domestic payments may not be the only thing on the crocodile's mind...

(the crocodile is Alibaba FYI...)

It's not just what goes in, but what comes out

in 2010, China's previous president, Hu Jintao urged Unionpay “to step up the effort to internationalize and strive to build Unionpay into a major global brand for bankcards." Obediently, and quite profitably, China Unionpay went forth and setup relationships will suppliers of LV and Gucci bags around the world to help satiate an increasingly global set of Chinese travelers who were eager to bring back cheaper luxury goods from abroad. For Chinese consumers, this meant no need to fiddle with a co-branded China Unionpay / Visa or Mastercard, they could just use their CUP card to pay directly, and then settle in RMB.

Ok, ok, so we are being a bit trite when we talk about Gucci bags and that all spending is on luxury goods, but there are millions of Chinese tourists travelling the world spending an increasing large amount of money. Although the overseas spend of these tourists seems to be decreasing as China's economic growth slows and the anti-graft campaign in China continues to affect spending, it is still significant enough that any upscale department store in Paris, Milan or Zurich will have at least one Mandarin speaking staff member and will accept China Unionpay.

Over 190 million people use Alipay's mobile wallet. It wouldn't take a big leap of faith to assume that nearly all of the overseas travelers would have a smartphone. Imagine now for a second if those overseas shoppers could use their Alipay wallet instead of CUP.

There is some work on the back-end that would need to happen to make this possible, but it is feasible. Instead of pulling out their CUP card, Alipay wallet users could use their iPhone to scan a QR or barcode at the store and then the back-end settles the transaction. Alipay already has the connections to the banks in China and is working on the international links. This could yet again give China Unionpay some headaches, but it will be much easier for Alipay to leave their mark on foreign NFC ecosystem than in the domestic market.

For Alipay this equals instant worldwide expansion for relatively cheap. For Apple, it means increased revenue from a subset of above average wealth consumers. This would also dovetail nicely into Alitravel, which is the travel related business that Alibaba just spun out.

So why is this unlikely to happen so quickly? Well, it's the dragon (replaces elephant) in the room: CUP. Apple partnering with Alipay either domestically or internationally might bother CUP slightly and risk that relationship and the access to those 3+ million domestic NFC POS terminals. Although we may see competition in the card processing space in the long-run, in the short run, this could be disastrous for Apple if CUP blocked access to the POS terminals. Indeed this is the challenge that all potential players in China are facing: how to implement their mobile payment solution without bothering CUP. If you're a Chinese MNO, you don't really care as you control the SIM-based secure element that dominates NFC payments in China currently, but what about the banks or smaller players?

Strange bedfellows: Could Apple work with both Alipay AND CUP?

Potentially, but we're skeptical. Looking at either the domestic China RMB or overseas shopping business models, an Apple Alipay partnership would step on the toes of CUP. Domestically, it would be head on competition. Internationally, it might work for remote payments (which supposedly will be part of Apple Pay in the future) and it could work in areas where CUP doesn't have a large presence. For this to work however, the NFC terminals would need to be 'open' enough to allow for different payment processors. I.e. they would need to be able to process an Alipay transaction without actually being an Alipay box. This might be a tall order if the boxes are locked down, but it is technically possible.

What we will see:

Although there is so much uncertainty surrounding Apple Pay and NFC payments in general, what we can say is that Alipay will be successful...somehow. They've proven that in China by dancing around the dragon (CUP) to setup a credible mobile payments platform. The QR and basic payment functionality of the Alipay wallet is device independent, and the NFC function likely will be soon, so it could be that Alipay doesn't actually need Apple or CUP for that matter.

Apple is of course keen to capitalize on the Apple Pay momentum and accessing another swathe of iPhone customers in China would be a coup. The Apple partnership with CUP is apparently awaiting regulatory approval, so Alipay would be a short-cut to market, but then the challenge would be if Apple would want to partner with the crocodile, but risk upsetting the dragon...