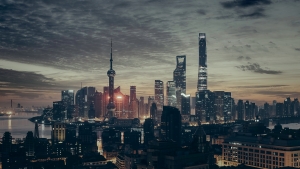 The key is to centralize blockchain, whether by creating a digital fiat currency - reportedly well underway - or supporting the private sector to implement blockchain solutions in line with Beijing's directives. Embracing contradictions is necessary here, as is the case with China's "socialist market economy."

In October, Chinese president Xi Jinping signaled Beijing's support for blockchain. According to state media, Xi urged "deep integration of blockchain with the real economy," which he said could help SMEs better access credit, enhance risk management in banking and more effectively supervise government agencies. Xi added that China has a "solid blockchain foundation" and called for the nation to accelerate the development of blockchain technology and strengthen related basic research.

Chinese investors reacted exuberantly to the publication of Xi's remarks about blockchain. Stocks of nearly 200 companies that invest in blockchain technology jumped around 8% on October 28, the first trading day after Xi's remarks were made public, according to East Money Information. Some rapidly hit their daily maximum increase of 10%.

Blockchain's potential to boost transparency could aid Xi's anti-corruption campaign. China has long struggled with falsification of official data at the local level. Of course, ensuring local governments keen to meet targets implement technology that could increase their vulnerability is another story.

From March to mid-December, 500 blockchain projects were registered with the Cyber Administration of China. Some strategic investors in the projects include Chinese tech giants like Alibaba, Tencent and Huawei.

Hainan Province, home to China's first blockchain free-trade zone (FTZ), announced in December that it would use a special fund of RMB 1 billion (US$142 million) to finance blockchain firms. Hainan aims to deploy blockchain in trade, tourism, healthcare and housing, according to state media.

As the state coffers open, China musttake care to distribute funding for blockchain initiatives prudently. Knowledge of distributed ledger technology among China's local governments is limited. Given the hype around the technology, there is a definite risk that state funds intended to support blockchain projects will not be optimized.

More in this category: « Is Libra really a threat to WeChat Pay and Alipay? Digital yuan initiative puts pressure on U.S. to up its virtual currency game »
back to top