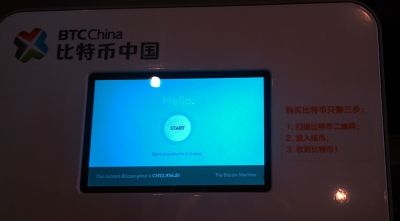 After couple of months of low trading volume and little news, BTC China, previously the largest and still one of the most prominent bitcoin exchanges in China has moved the goalposts for other exchanges (and the PBOC!) by launching the first physical Chinese Bitcoin 'ATM' at the IC Coffee Shop in Zhangjiang Hi-tech Park in Shanghai on Tuesday the 15th. In addition to the physical ATM, BTC China released a new mobile Web appcalled “Picasso ATM”, which is actually the main theme of the ATM launch.

To see firsthand what the ATM was like, Kapronasia went to give it a whirl.

1. Firstly, you need to have BTC China account to use the ATM which can be created through the BTC China webpage.

2. You start the process of depositing money to your BTC China bitcoin account by pressing the start button on the touch screen of the ATM. 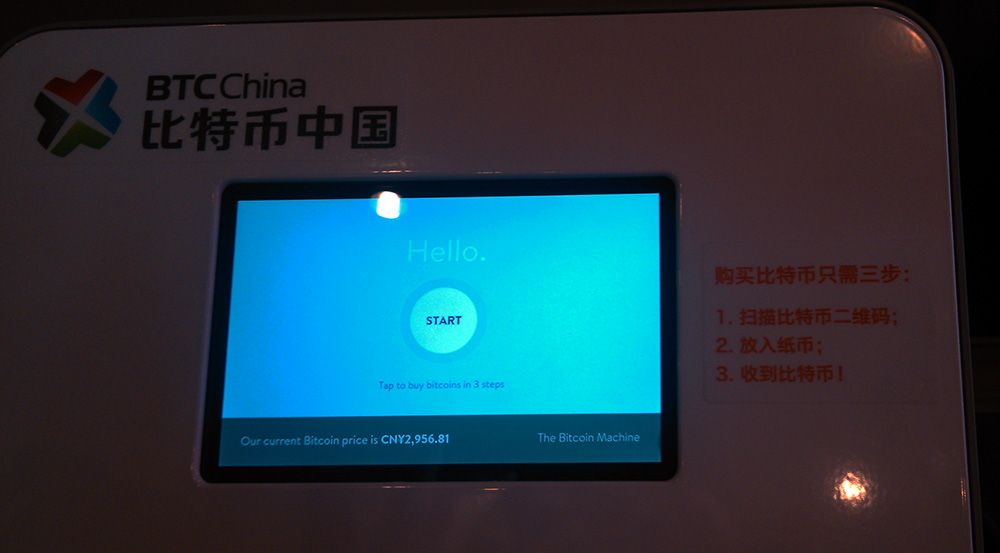 2. After that, you need use your mobile phone to access your BTC China account either through your phone's web browser or the Picasso web-app again. In either, there is an option to display a QR code with a public bitcoin address. Once the QR code is displayed, you hold your mobile phone’s display in front of a scanner located on the ATM machine. 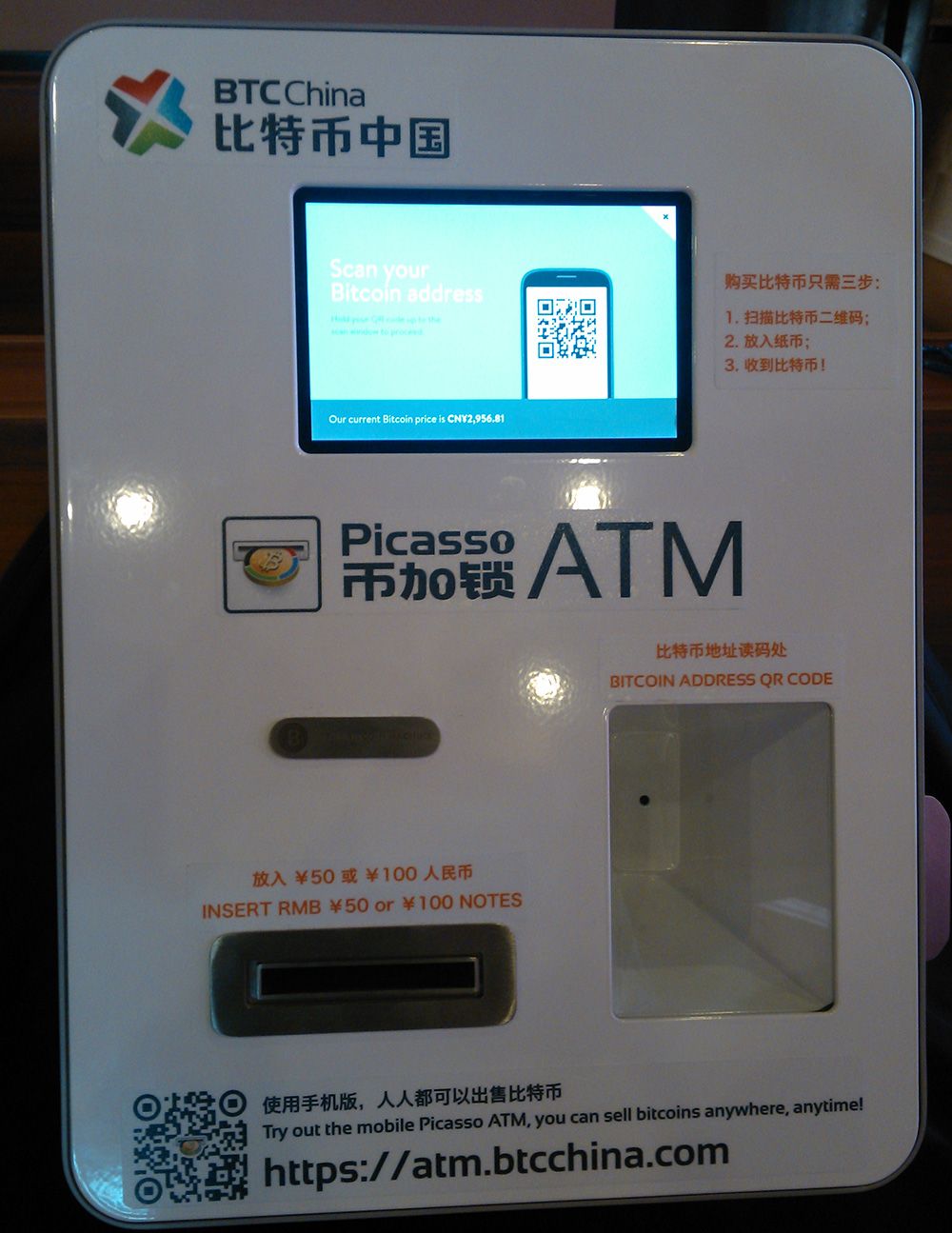 3. After scanning, the system prompts you to confirm that the personal Bitcoin Address number appeared on the screen is correct. After this is confirmed, you can insert either 50 or 100 RMB banknotes to the machine. This varies from loading your account via the web, where the minimum deposit via bank transfer is RMB2000. However, the machine only has an input slot, banknote withdrawal is not possible. 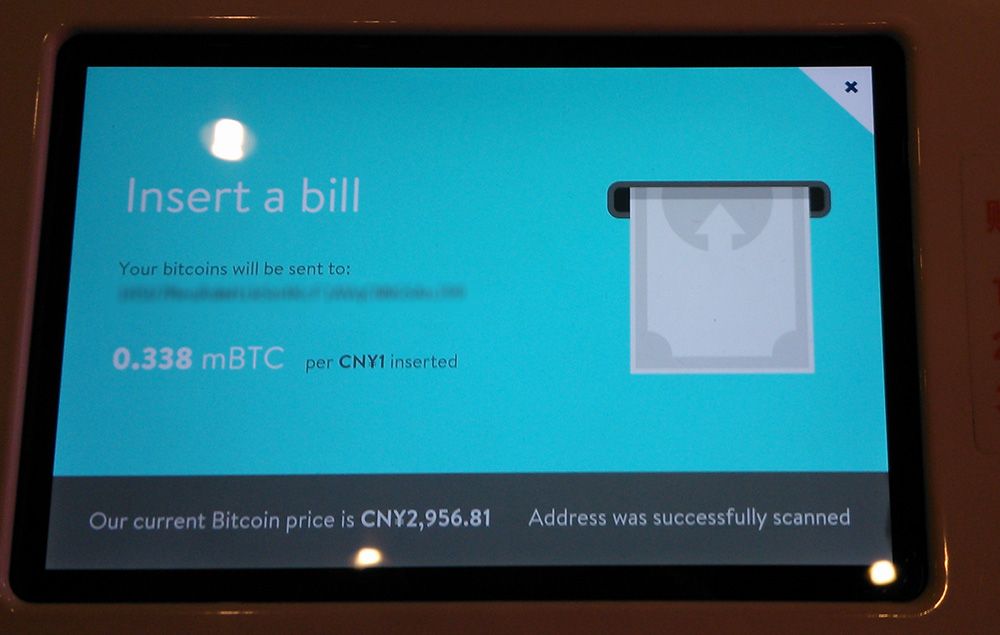 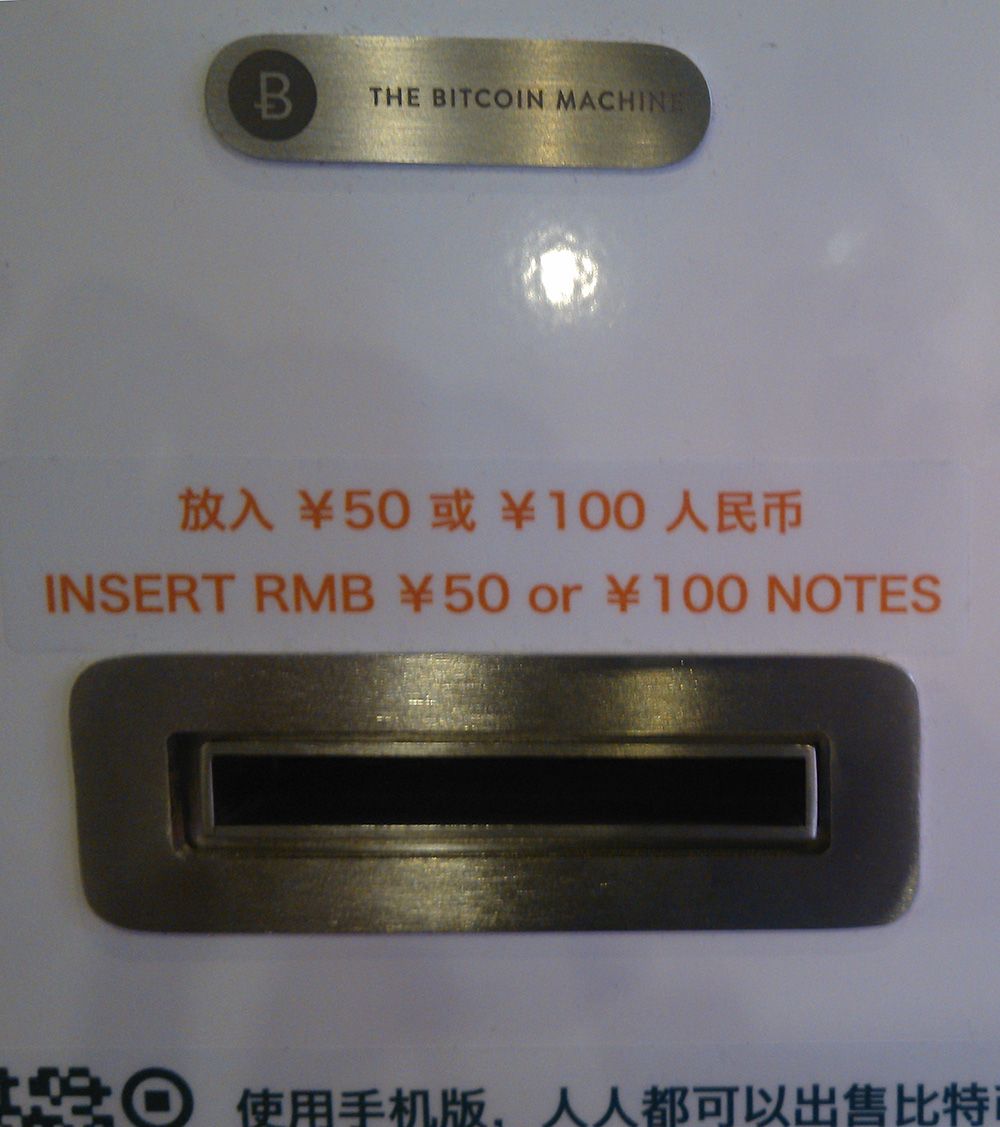 4. After inserting all the RMB that you want to convert into bitcoin, the last step is just to wait for the bitcoin to be sent to your account. 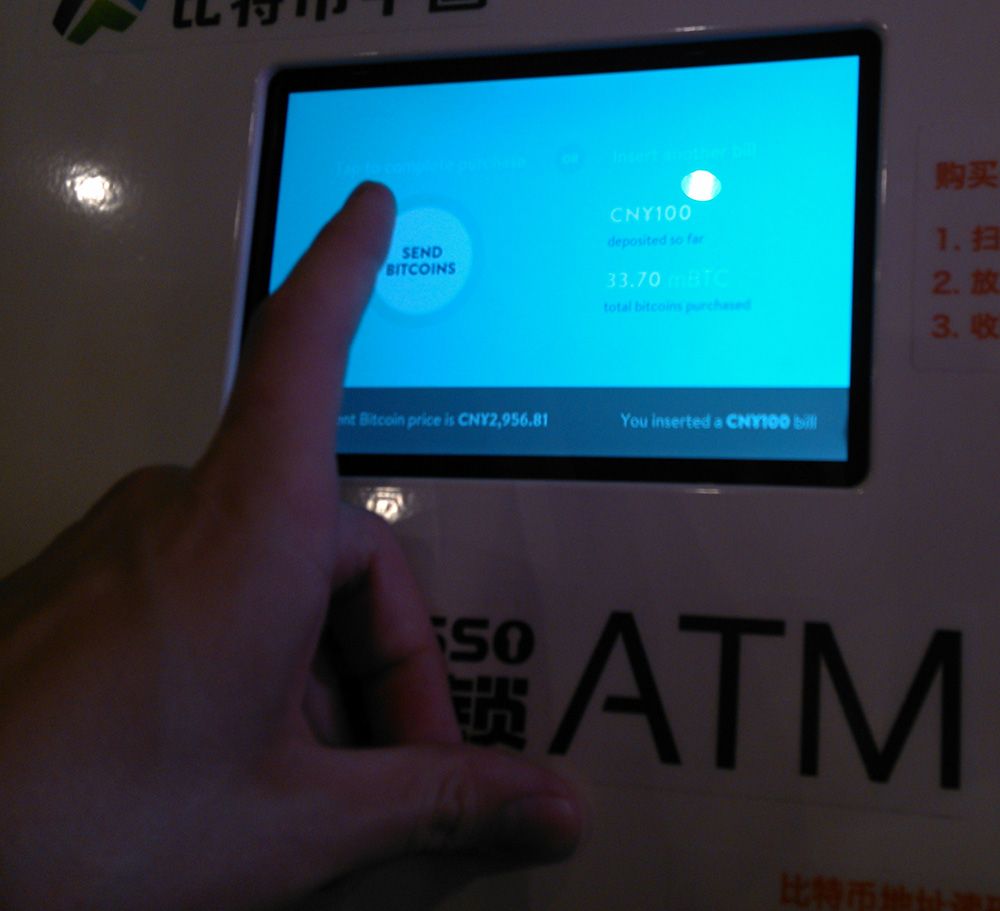 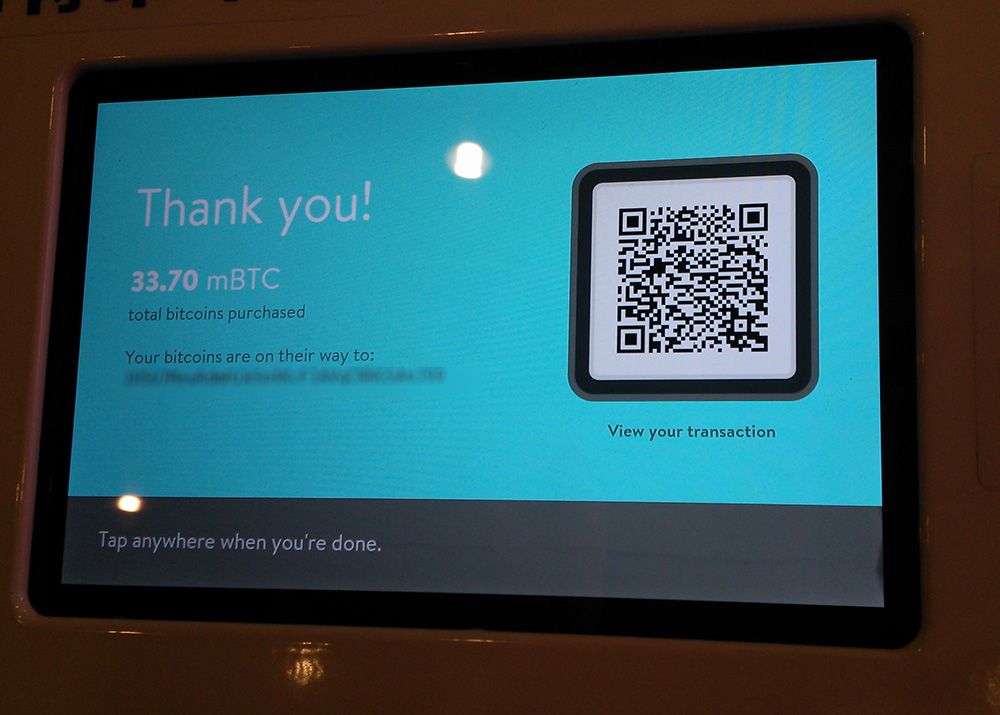 The whole process above takes about 1 minute, but it takes about 10 minutes for the bitcoins you just purchased to be credited to your BTCChina account.

Beyond going to a physical ATM to purchase Bitcoin, BTC China also launched mobile Picasso "ATM" for users. As Picasso ATM is only a web app, so users don’t need to download software onto their smartphones, instead they can send or receive Bitcoin immediately through their Picasso web wallet. "Picasso ATM" is actually a bit of a misnomer as you can't actually deposit or withdraw fiat currency through the application, but it does open up the online to offline possibilities.

A few weeks ago, rumors were rampant that April 15th marked the Chinese ‘d-day’ for bitcoin, saying that from the 15th, banks would no longer work with bitcoin exchanges. The concept was actually nothing new – if you read the regulations from the PBOC in December 2013, they all pointed to an eventual ban. Yet, when the original Chinese New Year date of the ban came and went, and exchanges were still able to do business, industry observers (including ourselves), were left scratching our heads and wondering what happened.

The rumors restarted about a month back with the new date of April 15th and the price of bitcoin tanked – the PBOC then responded with a comment that the rumors were not true, and a couple of days ago, Zhou Xiaochuan, PBOC’s president, said that they will not crack down Bitcoin. Zhou considered Bitcoin like stamps, which are not a form of currency, but hold 'collection' value; so it is legal for people to transact Bitcoin as assets, but not as currency. Encouraged by Zhou’s words, BTC China chose the supposed shutdown date of the 15th to announce the Picasso ATM with a hope to promote the development of Bitcoin in China.

BTC China is still confident and indicated that as long as China government doesn’t outright prohibit Bitcoin, they will continue their Bitcoin focus which is understandable as they have PE investment and so need to stay the course. They also mentioned a shift in the bitcoin 'holder' base. In 2012, most bitcoin holders were investors who were working to expand the industry. In 2013, this shifted more to speculation. Now as the market has cooled, speculators have largely left the market and it's coming back to investors.

After having visited the first Chinese bitcoin ATM and after chatting with Bobby Lee from BTC China, the promotion of the Picasso ATM seems to be a good strategy for BTC China and likely will help the market. There has been tremendous speculation as to the future of bitcoin in China, so this will certainly bring some relief to people who felt that bitcoin was over in China.

The challenge is still whether people consider bitcoin valuable and whether it has utility as a payment method, which are tightly linked. Use of bitcoin as a payment method in China is a bit up in the air right now as the government regulations in December last year cut down on the number of merchants accepting bitcoin and the large ecommerce platforms including Taobao have very little acceptance. Our research found that as of February this year, no merchants on Taobao and Paipai accept Bitcoin as payment, while last December, there are around 65 online merchants accepting Bitcoin.

So without usage for payments, bitcoin needs to be an acceptable store of value. The market-cap and distribution of bitcoin is an indication that this is not happening either; rumors and wildly fluctuating values aren't helping. BTC China chose this time to launch its Bitcoin ATM with a hope to extend the development, but is it too little too late?

More in this category: « BTCChina launches shanghai ATM, says 'bit(e) this' to PBOC. Bitcoin in China, where to go? »
back to top