Following more stringent regulation on hydrocarbon emissions and new economic stimulus, 2016 has been characterized by a notable shift in the Chinese commodities market from extraction to processing. The new trend can be seen in rising indices of oil refineries, steel, aluminium and copper in tandem with a cut of supply of crude and coal. This phenomenon will have far reaching implications for construction companies, tech firms, China’s commodity exchanges and the macro economy as a whole in 2017. 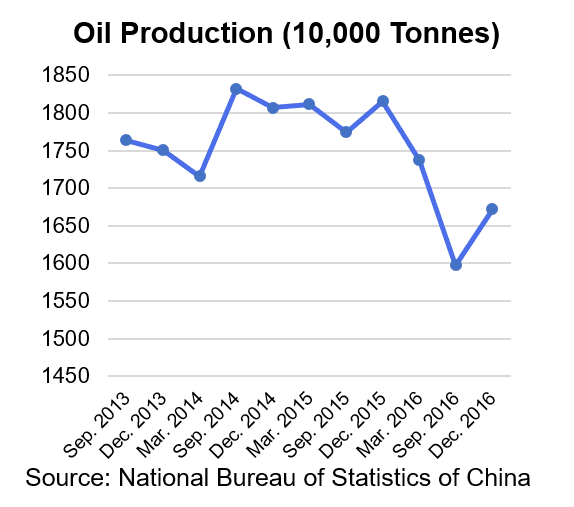 There are a multitude of suspected reasons for the move, the most obvious of which is the pressure generated by post 2014 shale revolution prices on crude. Despite more recent recovery and stabilization prompted by OPEC’s decision to limit supply, Chinese domestic producers maintain that they require a price of at least $60/barrel to generate a profit. Coupled with new initiative by Beijing to curb pollution with the introduction of the National V Standard, the cost of extraction has been too great, with China's biggest producer Petrochina struggling to break even in the last quarter.  Conversely, today’s commodity market has proven itself to be profitable for China’s oil refineries.

Whilst low oil prices have boosted refinery indices, growing construction and government spending on infrastructure, together with an increasingly developed auto sector have equally benefited metal production. Morgan Stanley analysts conclude that this recent development is likely to help spur nominal growth. Although the recent period of reflation that has come as a result of said pressure to increase price and production of metals, makes a strong case for tighter monetary policy.

With iron ore indices trading at the highest price on the Dalian Commodities Exchange (DCE) since the launch of the bourse, and similarly for iron ore futures, it begs the question of which direction Chinese regulators will take. The idea of developing more advanced trading systems has already been taken into consideration, with the DCE being granted the Soybean Options contract. The rally serving as a precursor, more incremental change for more advanced trading products and instruments on Chinese exchanges could follow. Li Zhengqiang, chair of the DCE remains optimistic. Beijing, on the other hand appears to be working on its own time-frame.

Although the metal rally may help temporarily serve Beijing in achieving its goals of increasing regional trading clout whilst maintaining tight regulatory controls. Creating such a regulatory framework whilst remaining attractive to foreign investors has previously proved difficult. In context, the postponing of the crude oil futures contract which hoped to set a new regional benchmark for crude in Shanghai, exemplifies this issue quite well as investors are weary of using the Yuan with new imposed limits on currency conversion. This however is a symptom of much larger skepticism on behalf of investors in regards to government intervention in markets.

Further subsidies for construction companies and greater industry investment are of greater certainty and can be expected for 2017. Since the National Bureau of Statistics concluded that the success of the metal manufacturers is largely due to high tech innovation, more of the same can be said for the technology manufacturing sector as witnessed in the previous year with the development of Shenzhen area. Investment in software and big data should help improve logistical efficiency and communication.

Overall, it remains to be seen how Chinese regulators will act in 2017. The dilemma of keeping their pulse on price inflation and capital controls vis-à-vis a resurgent market and a favorable environment for foreign investors, remains unresolved.

More in this category: « China introduces fines and blacklists to tighten control on individual purchases of foreign exchange Chinese bond market: Regulatory initiatives provide impetus for growth »
back to top