The Future of Treasury Bond Futures in China 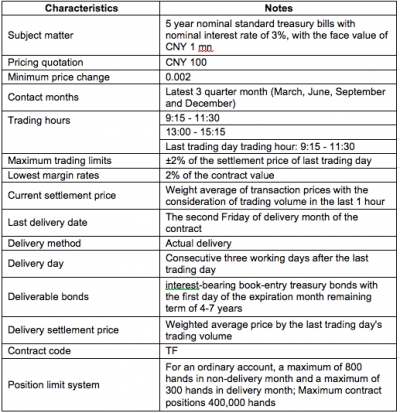 On 4 July, 2013, The China Securities Regulatory Commission (CSRC) announced that the state council of the People’s Republic of China (PRC) had approved the Treasury bond futures’ return to trading, specifically on the China Financial Futures Exchange (CFFE). Currently, the T-bond futures are under the final preparation stage and it will take approximately two months for this preparation period before they officially are released and start trading. So the most likely time for T-bond futures to be released is in early September.

T-bond futures are a category of mature and simple interest rate derivatives in mature western markets, which are treated as a basic tool for managing and hedging the fluctuation of treasury bills. For Chinese market, the release of T-bond futures is meaningful, as it is thought to be a sign of continued commitment to deepen China’s financial market reform and innovation.

Based on CSRC’s guidance, there are four key rough guidelines or considerations surrounding the trading of T-bond futures: Firstly, traders of T-bond futures will mainly be large institutions such as commercial banks, insurance companies, securities companies, funds and other professional investment institutions, which is quite different to the current Chinese A-share market which is predominantly retail. This may be somewhat because the complexity of government bond futures might be beyond the average retail/small investor.

Secondly, from the perspective of daily price limits and the risk involved, the allowed fluctuation of T-bond futures’ price will be very small: for 5 year T-bond futures, the fluctuation will be restricted to +/- 2%, which is more suitable for institutional investors.

Not the first time

Actually, T-bond futures are not something new to the Chinese capital markets. The earliest trial of T-bond futures started in December, 1992 on the Shanghai Stock Exchange. However, the trial ended in May, 1995 due to some well-known over-speculation, which is called the famous ‘327’ Event, as well-known as the Chinese ‘Barings Bank’ Event.

The table below shows some basic information of possible T-bond futures’ contract. 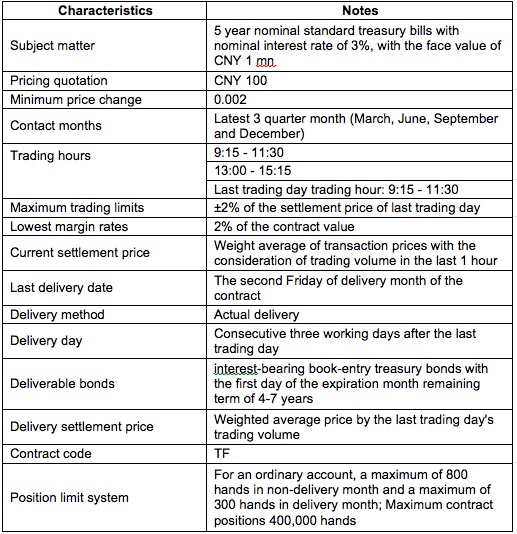 For investors, especially institutional investors, T-bond futures are good financial derivatives that could be important component of their portfolio to hedge risk of T-bonds that the investors may hold. And for foreign investors, although it is still not announced whether they could be allowed to participate in the trading of T-bond futures, under the current situation, it is highly likely that they might be allowed to participate through QFII and RQFII.