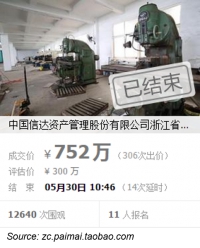 Want to unload that bad debt on your books? Now you can on Taobao. Cinda Asset Management, one of China’s Big 4 state-owned bad asset managers, has partnered with Taobao to sell RMB 4 billion-worth of creditor’s rights on the e-commerce company's asset disposal platform. This is seen as another potentially very successful cooperation between finance and internet industries as a large asset owner will have access to many new buyers through Taobao’s powerful channel.

The partnership comes after a few months of testing when Cinda successfully sold off some of creditor’s rights it previously owned. For instance, the RMB 20 million sale of a steel plant and the RMB 4.4 million sale of a light industry factory, both located in Zhejiang Province.The buyers were individuals and not financial institutions, and are the main users platform targeted by the platform.

Cinda and its peers are the reason behind Chinese banks’ rather low non-performing loan ratios, which though are growing, still are approximately less than 2%, quite a healthy number compared to banks in other territories. Distressed asset managers purchase bad debt from banks and then manage it to receive as much cash as possible.

As investment in such assets is highly risky, industry observers have expressed doubt that Taobao is the right place to distribute bad debt. However, as executives at the company have mentioned in their interviews before, in this case, the platform functions only as a shop stand and doesn’t take any risks, but rather showcases products available for sale, the same thing that Cinda was doing on its website before, but on a larger scale.

The partners have more products in the pipeline, such as stocks, commercial space, land rights, patents and even advertisement air time. Taobao brings technology support and buyer traffic to the table, while Cinda-like managers have amassed assets that they are looking to sell. The only thing both sides are looking for is more mature regulation. Once it is in place, Taobao may become the go-to place for buying not only socks at a bargain, but factories and even land rights too. 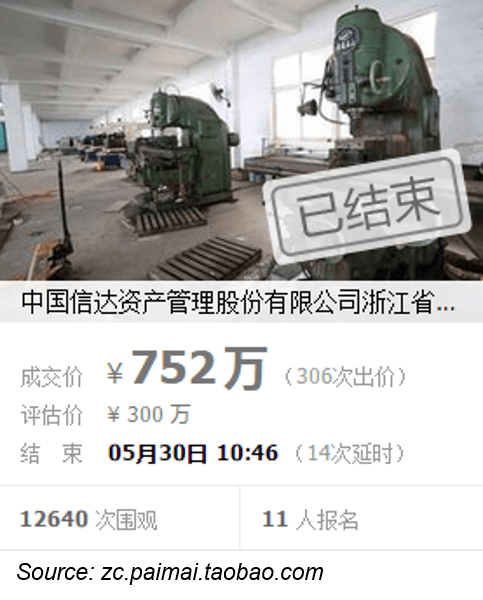 More in this category: « More China hedge funds mean more China derivatives trading Shanghai markets expand further with the addition of a growth enterprise board »
back to top