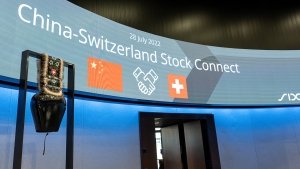 Historically, Chinese companies seeking to go public overseas have listed in the United States, home to the world’s most liquid capital markets. Nothing can quite compare with listing on the New York Stock Exchange (NYSE) or Nasdaq. While that remains the case, the fraught U.S.-China relationship has caused Chinese firms to turn their focus to European stock exchanges, especially Switzerland’s SIX. In Europe, Chinese companies can mostly steer clear of geopolitical tensions while still being able to access global investors.

The expansion this year of the Shanghai-London Stock Connect to Switzerland has catalyzed the European deal pipeline for Chinese companies. To be sure, these listings cannot compare in size and impact with the blockbuster consumer tech IPOs of yesteryear, such as Alibaba’s triumphant debut on the NYSE in 2014.

The type of companies raising capital in Europe show how the Chinese government’s economic priorities have changed. Instead of internet giants, these are often firms in the next-generation “hard technology” space, such as electric batteries. Beijing is intent on developing world-leading capabilities in such industry segments as part of a broader plan to become an advanced manufacturing powerhouse.

In mid-November, Shenzhen-listed Sunwoda, the world's biggest consumer battery maker by installed capacity, raised US$440 million in equity issuance on Swiss bourse SIX. Sunwoda is the latest of eight listed Chinese firms, among them Lepu Medical Tech and battery maker Gotion High-Tech, that have raised more than US$2.5 billion with global depositary receipts (GDRs) on the Swiss bourse. Exchange filings show that more than a dozen Chinese companies plan to follow in their footsteps.

Mandy Zhu, head of global banking at China UBS, told Bloomberg that the Sunwoda deal illustrates that Chinese companies with strong fundamentals “can still whet appetite even in an adverse market environment,” provided that underwriters can help identify the right investors.

Meanwhile, Refinitiv data show that just US$152.5 million in Chinese listings have occurred in the U.S. thus far in 2022, a small fraction of the US$12.8 billion in 2021. But will the deal pipeline remain frozen indefinitely?

Not necessarily. The U.S. and China recently reached a tentative agreement about audits of Chinese companies that may prevent a mass delisting of Chinese firms from U.S. exchanges. If the broader U.S.-China relationship can be stabilized – and that is a big “if” – then there is certainly potential for Chinese companies to start pursuing IPOs in the U.S. again.

Ultimately, European exchanges like Switzerland’s SIX may allow Chinese companies to sidestep geopolitical obstacles, but they do not offer the same scale as NYSE and Nasdaq. There is really no comparison. We will be closely watching the political climate in Washington now that the midterm elections are over to assess the chances for even a minor U.S.-China détente that could augur well for U.S. capital markets.

More in this category: « Europe continues to attract Chinese listings Why did China’s IPO market fare well in 2022? »
back to top