What to expect for the Post-Brexit UK-China Relationship

One of the significant implications of the Brexit EU referendum is that over 40 years of political and commercial contracts and relationships will need to be reviewed. Once Article 50 of the 2007 Lisbon Treaty, which specifies the procedure for the exit from the EU, has been implemented, the UK will then have two years to negotiate its withdrawal as well as its participation in all of the existing UK-EU arrangements. Although the new Prime Minister, Theresa May, has stated will only happen next year, the UK will need to re-establish its current trading interests and create new ones. One of the most critical partnerships to be re-negotiated will be the one that it has with China. 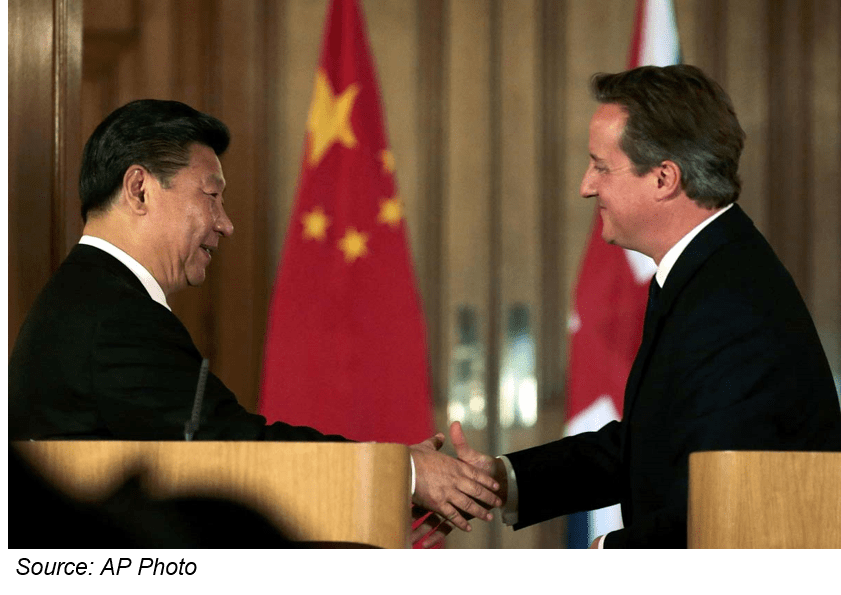 Britain, which houses the EU’s largest finance sector, has been pushing in recent years to expand financial ties with China, which, in turn, has agreed to develop their cross-border financial service schemes and ties into the UK-China Economic and Financial Dialogue (EFD) program. The UK’s former Chancellor George Osborne and Chinese Vice Premier Ma Kai delved into the idea of a London-Shanghai equity link for trading schemes, but no further developments have taken place so far.

Britain’s Financial Conduct Authority (FCA) and the China Securities Regulatory Commission (CSRC) have been cooperating on a regulatory framework that distributes funding to products in their respective jurisdictions. This framework is similar to that of the Hong Kong-China memorandum of understanding (MOU), although it is not clear if the UK-China collaboration will be as extensive in the new regulatory framework.

Back in October 2015, former Prime Minister David Cameron reached an agreement with Chinese President Xi Jinping. This meeting was supposed to 'raise the curtain' to usher in the 'golden era' of China-UK relations. Chinese investors, led by China General Nuclear Power (CGN) in partnership with EDF of France, proposed to develop a future nuclear reactor project, costing a total £18bn at Hinkley Point, Somerset. Those plans were on track until the new Prime Minister recently delayed the project and the planned Chinese investment. Along with the Chinese investors, even the French counterpart, EDF France, was taken by surprise of Mrs. May’s decision.

If the deal is suspended, it may hinder the UK's trade growth with China, and therefore deter the coming of the 'golden era' of UK-China relations; this is for a multitude of reasons. Not only did Mr. Xi himself sign the Hinkley deal himself, another Chinese company was due to take a stake in the project - China National Nuclear Corporation (CNNC). The CNNC is a constituent of the military-industrial complex that maintains Mr. Xi’s power base, and the intervention of the project may lead to feelings of distrust and a personal veto on President Xi himself. Nevertheless, Mrs. May has stated that a final decision on the nuclear reactor project will not be finalized until autumn of this year.

Ultimately, Britain’s exit from the European economic zone may not hinder any cross-border exchange initiatives in the long term. However, neither Britain nor China is expected to announce any major new financial service initiatives at this year’s EFD meeting, which will be held in October or November in the UK, thus delaying any discussion of a London-Shanghai stock link or similar financial industry initiatives.

More in this category: « What do Chinese retail investors really want? – Lessons from the LendIt China conference Developments in Inclusive Finance in China »
back to top