Overview of the QDII program in China

All the participants in the QDII program are required to first obtain a QDII license from the relevant regulatory agency (either China Securities, Banking or Insurance Regulatory Commission) and then a quota, which is granted by the State Administration of Foreign Exchanges (SAFE) as the first step of their oversea investment. After insurance companies, commercial banks and fund companies were allowed to obtain QDII licenses in April 2006. The first bank to receive a QDII quota was the Bank of China (BOC), with US$1 billion of quota, which was granted on 10 July 2006.In September 2006, HuaAn Fund Management Co., Ltd. was approved to be the first fund company to get a QDII quota of US$500 million.

As of the end of February 2012, 96 QDII licenses have been issued to 26 commercial banks, 31 fund companies, 8 security companies, 26 insurance companies and 5 trust funds, with US$75.25 billion of investment quota allocated.

After the approval of Bank of China and the HuaAn fund as trial QDIIs in 2006, the QDII scheme has expanded to involve more institutional investors since 2007. As of the end of 2007, US$64.5 billion of QDII investment quota has been approved by SAFE. However, due to the global financial turmoil, the QDII scheme was suspended in the second half year of 2008 and no quota was approved until the program was restarted in May 2009. 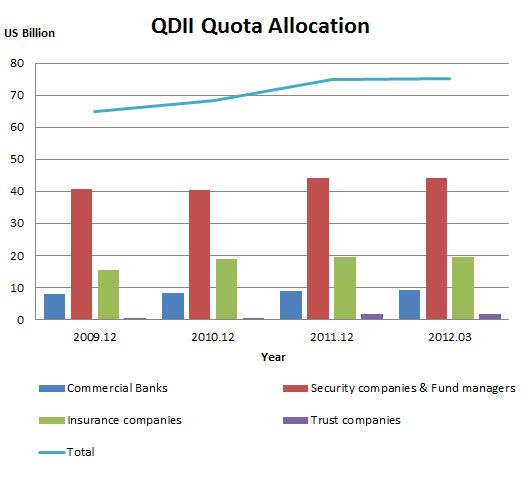 By the end of March 2012, the total quota approved by the SAFE has reached US$75.25 billion, surpassing the total figure (US$74.95 billion) of last year. With the further global recovery of the global financial turmoil and the further development of emerging markets, it clearly remains optimistic that the outbound investment of QDII this year will reach a new high level.

More in this category: « IMF Updated China Economic Outlook The latest from the Euro-zone and China’s Economy »
back to top