According to data from the China Securities Depository and Clearing Corporation Limited (CSDC), there were 261 new Qualified Foreign Institutional Investor (QFII) accounts opened in 2013 which represents about 43% of the total QFII account number from 2003 to 2013. Compared to 2012 figure. Number of QFII accounts rises by 129%.

So why are foreign investment institutions so interested in opening up accounts to trade the Chinese market when returns are so low? One reason is that the mainland regulators have been pushing towards more open markets and lowering the QFII requirements with the intent of introducing foreign capital to provide better liquidity in an anemic a-share mainland market. In addition to new accounts, more than $49.7 billion in QFII investment quota was approved in 2013.

The potential second reason is that foreign investors see potential opportunities in the mainland market either with current relatively low valuations or in the anticipation of future market growth if the market does pick up. 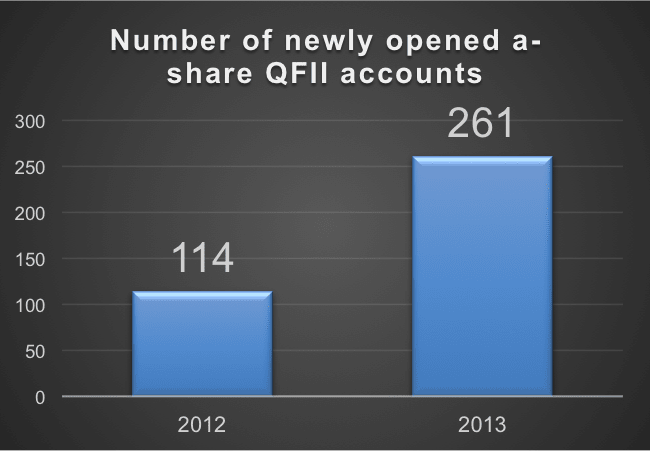 More in this category: « Zhaopin, a late comer to the NYSE Upcoming Kapronasia Webinar: January 23rd - 2014 Top 10 Financial Industry Trends in China »
back to top