At a recent conference, the Asset Management of China (AMAC) declared that there are 713 hedge funds in Zhejiang province alone – a surprisingly large number, considering some of the statements by international experts as recent as 2014 that there are no more than ten hedge funds in China. Futures trading is also up 30% on the main exchanges in China - a strong correlation.

First of all, it is important to say that “hedge fund” is somewhat of a misnomer when applied in China. The AMAC uses the word 对冲基金, which is translated as “hedge fund”, however such funds are different from typical hedge funds in other markets. In China, hedge funds that employ algorithmic and high-frequency trading to beat the market are rare as the regulation and technology is just not there yet to allow such trading methods.

At the same time, local hedge funds, also called Private Funds, have other attributes justifying the name. First, these funds have a high investor requirements both in investment amount and investment sophistication. Second, these private funds generally outperform an average mutual fund on the market. Third, they do employ sophisticated techniques and trade in derivatives largely avoid by retail investors and public funds.

At the aforementioned conference an AMAC executive mentioned that private funds trade stocks, bonds, futures and employ such strategies as event-driven trading and relative value arbitrage.

Indeed, data shows that commodity futures trading is booming in China. Though the economy is not growing as fast as before, trading in the asset class rose approximately 30% both on the Shanghai Futures Exchange and the Zhengzhou Commodity Exchange. Much of this expansion is driven by hedge funds. There are more hedge funds now, and they are increasingly allowed to trade more sophisticated financial derivatives.

Thanks to industry deregulation by exchanges and regulators in 2013 more hedge funds are active on the mainland. The CSRC’s rules in 2013 and Asset Management Association of China’s rules in 2014 have simplified fundraising. As a result, there was a surge in offerings by Chinese hedge funds.

It appears that the financial regulators favor the hedge fund industry now. Citing the usual reasons like making the financial system more robust and efficient, the AMAC also called for the development of hedge funds as their absolute return strategies are what investors like pension funds are looking for amid the volatility of the stock market. There’s also a strong political desire to bring global commodity price formation closer to home, as China is the biggest importer of a few types of commodities and its economy is very dependent on commodity prices.

The combined push for development of commodity derivatives trading and hedge funds will have a synergic effect on both industries. Deregulated hedge funds now can trade more asset classes and thus expand their strategies and product offerings – and now there are 6,714 hedge fund products managing RMB 873 billion. As they trade more, they bring liquidity to the commodity futures market. 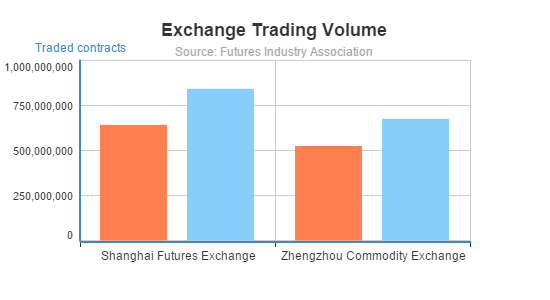