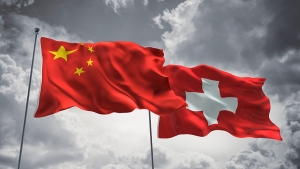 Is Europe the new New York for Chinese companies keen to raise capital overseas? Not exactly, as there is no exact replacement for the capital markets opportunities that the Nasdaq and NYSE once afforded Chinese firms. But given persistent tensions in the U.S.-China relationship, Chinese companies are opting for less liquid capital markets and less prestigious overseas listings – but without any of the geopolitical drama that has come to characterize their presence on U.S. exchanges. Switzerland’s SIX, meanwhile, is fast becoming the exchange of choice for Chinese companies wanting to raise capital outside of Greater China.

Since the launch of a stock connect scheme with Switzerland in July, nine Chinese companies have listed on the SIX. They have raised US$3.15 billion, far exceeding the amount raised by Chinese firms in U.S. capital markets last year.

The latest Chinese company to list on the SIX, chemical manufacturer Jiangsu Eastern Shenghong, raised US$718 million in the Swiss market's largest IPO of 2022. The A-shares of the company are listed on the Shenzhen Stock Exchange.

Chinese companies have turned to the SIX because it is a much safer bet than U.S. capital markets at this point. Swiss regulators are not pressing Chinese companies on their audits the way the U.S. is; rather, Swiss and Chinese authorities have agreed on mutual recognition of their respective accounting rules and supervisory frameworks. Though Washington and Beijing have seemingly reached a compromise that will prevent the mass delisting of U.S.-listed Chinese firms (there are currently 173), it is anyone’s guess how long that deal will hold in the current political environment.

The possibility of future forced delisting is taking its toll. Only 16 Chinese companies went public in the U.S. in 2022 compared with 42 the year before, and the total amount of funds raised dropped by 96% to US$540 million, according to an estimate by Deloitte.

Separately, in December, the UK unit of state-backed investment bank China International Capital Corporation (CICC), joined the Luxembourg Stock Exchange (LuxSE) to strengthen links between China and that country as well as Europe overall. CICC UK was also the first Chinese investment bank to join the London Stock Exchange, the SIX and the Frankfurt Stock Exchange as a member. According to Bloomberg, CICC UK was chosen by Longi Green Energy Technology, the world’s largest producer of solar panels, to issue global depositary receipts (GDRs) in Switzerland in October.

More in this category: « Why did China’s IPO market fare well in 2022?
back to top