China's bull market is a test for brokerage technology

As China's bull market continues, new accounts are being opened and trading volume is growing. One unexpected outcome is that existing capital markets technology is being stress tested and it doesn't seem to be coping that well...

March 23rd saw 1.2 trillion RMB of transactions on the Shanghai Stock Exchange, a new Mainland record. However, it seems like some of brokerages systems weren't up to the task and failed. Customers of brokerages such as China Merchants, Shenwan Hongyuan, and Qilu Securities were reporting not being able to make trades in the morning of the 23rd. The issue seemed to resolve itself throughout the day and was back to normal by the end of the day.

In addition to stock trading, some investors reported issues with options trading, which actually wasn't the first time. During the bull market in November some traders also were also unable to log into their accounts. As of now, the brokerages haven’t made an official statement regarding the reasons for the March system failure.

Most of China's trading systems were set up when trading volume was much lower. The country was in the midst of a bear market and upgrading trading technology wasn't a priority for securities companies. In addition, the functionality required when the systems were installed was different - margin trading, as an example, was only started recently.

It is commonplace for brokerages in the more technologically sophisticated markets to have disaster recovery systems to prevent failures. Most brokerages in China also have back-up systems, but seems like there were also challenges here. According to IT employees of local securities firms, most firms haven’t implemented an automated failover. Once a failure occurs, maintenance workers will manually switch from the primary trading system to the disaster recovery system which delays the response time.

Some of the companies are already considering upgrades. According to media reports, one such firms was Southwest Securities, which was planning an upgrade right before the Chinese New Year from Hundsun’s UF 2.0 system to a newer version. The system has two cores which are normally operated side by side. If there is a failure on one, the other picks up the pieces. Unfortunately the new system is still being implemented, so was of no help when volume spiked.

Brokerages are nervous to make any upgrades currently as there is so much money flooding the market - no one wants to chance putting customers off. They also will likely not be turning to foreign vendors for help. Although there hasn't been a formal announcement restricting the systems and platforms that capital markets firms can use, if we use the banking industry as an example, very likely they will be stuck with domestic technology in the future.

The one thing they do have going for them is that they are certainly flush with cash. 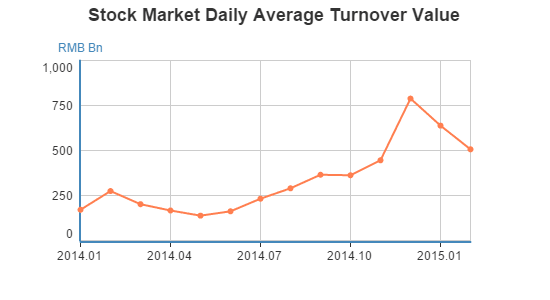 More in this category: « A look at Options Trading in China Shanghai and Hong Kong hit new highs, but Chinese investors still stick to what they know »
back to top