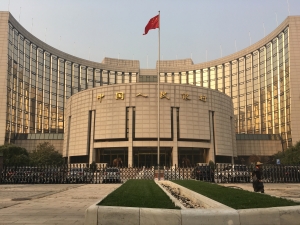 Since the state took over Baoshang Bank in May, many smaller lenders with sub-par balance sheets have had trouble raising funds. Sometimes they only have been able to to raise 20-40% of their targets in the interbank market for negotiable certificates of deposit, The Financial Times recently reported, citing data from UBS.

China's central bank now deems 13% of the nation's 4,379 lenders high risk, up from 10% last year. Most of the 586 firms in that category are small and rural-based, according to the People's Bank of China's 2019 China Financial Stability Report.

China's banking sector has been hit by a tripartite blow: Beijing's own efforts to deleverage, the trade war with the United States, and a steady economic deceleration which precedes the crackdown on risky lending by many years. The Chinese economy began to slow in 2012 after a decade of torrid, often double-digit growth.

Simultaneously, the banking sector has been hit by tougher rules from Beijing, such as stricter requirements on recognizing overdue loans. The changes are causing to NPL ratios to creep up revealing problems in off-balance sheet lending. Some small Chinese lenders previously lent without discretion to local governments and businesses that were unlikely to be able to pay back their debts.

Some of those banks have had questionable corporate governance as well. Jiang Xiyun, the chairman of Hengfeng Bank from 2008-2013, was charged with embezzling RMB 750 million ($110.8 million) of the bank’s shares. His trial was held in Shandong Province in January 2018. His successor Cai Guohua is also under criminal investigation.

Analysts say that Beijing should develop a more effective strategy for reducing risk among China's smaller banks. Yang Zirong, an associate research fellow of the Institute of World Economics and Politics of the Chinese Academy of Social Sciences, recently told the state-run Global Times that such banks are in a tough position, on the one hand being pressured by the government to lend to SMEs and the other being subject to deleveraging. Yang said Beijing could consider setting up a dedicated working group to monitor risk at smaller banks as well as a crisis-management mechanism.

Further down the road, rising consumer debt could become a problem for China. In a recent report Caixin notes that Chinese consumers continued borrowing voraciously last year despite a fall in income growth. As a result, China's household loans surged more than 18% to about RMB 48 trillion ($10 trillion), growing 7.5% faster than nominal disposable income.

Income growth is tapering off in tandem with the overall economy. In the year to September, real per-capita disposable income rose 6.1%, compared to 6.5% during the same period a year earlier and 7.3% in 2017, Caixin noted.

Tags:
More in this category: « China bets big on Africa fintech There is no China-US financial war - yet »
back to top