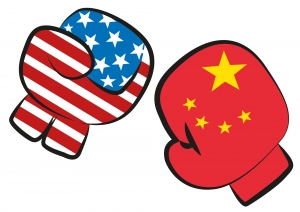 U.S. President Donald Trump is at the core of the Sino-U.S. trade war, just like he was the company boss and host of the reality-TV series The Apprentice. Trump fired many a contestant on the show. His White House staff has seen its fair share of defections too. The trade war with China has the air of reality TV, like much of The Donald's presidency, with even more twists, turns and quips. Trump became famous on The Apprentice for telling contestants, "You're fired!" In the trade war (show), his one-liners are even better: "Trade wars are good and easy to win" and "I am a Tariff Man."

More than eight months in, the U.S. is faring better than Trump's detractors could have foreseen. Markets are admittedly jittery - and that's a key reason Trump wants to end the conflict soon - but the U.S. economy continues to grow steadily. The Fed says full-year growth was likely just below 3%. Meanwhile, since exports still form a bedrock of the Chinese economy, Trump's tariffs have taken a heavy toll there. China's GDP grew 6.6% in 2018, its slowest expansion in three decades. FDI increased 3% to $135 billion, down from 7.9% growth in 2017.

Some analysts say that the U.S. will never be in a better position to press China on trade. A trade deal that doesn't include China pledging to end forced technology transfers and reduce the state's role in industrial policy - behavior at odds with WTO rules - would be toothless, they say.

Why then does The Donald seem ready to settle for big Chinese purchases of soybeans and semiconductors? Those would make a dent in the trade imbalance, but not eliminate it. In 2018, he rejected similar deals several times. Yet according to a Feb. 24 Bloomberg report, Trump told U.S. Trade Representative Robert Lighthizer on Dec. 1 to resolve the trade spat within 90 days, ahead of a planned increase in tariffs. Trump was adamant a deal must be made, even as Lighthizer told him China was not prepared "to make meaningful concessions," the report said.

The simple answer is that Trump doesn't want to be fired. If he raises tariffs on US$200 billion in Chinese goods to 25% from 10%, the U.S. stock market won't like it.  Investors might even panic. The dismal performance of U.S. stocks in December, the worst since the 1930s, unsettled Trump. If economic gloom sets in, the U.S. president's reelection chances will narrow. Remember, he won the presidency by 2016 by eking out the narrowest of victories in Wisconsin, Pennsylvania and Michigan. His approval rating has rarely cracked the 45% threshold.

On the other hand, if The Donald declares victory in a trade deal, markets will rally. The Dow rose 150 points on February 25 just because Trump extended the March 1 deadline that would have raised tariffs to 25%. Imagine how investors will react when an armistice is signed. The substance of the deal will matter less to markets than the U.S. firms for whom Trump supposedly waged this trade war. If tariffs are lifted without substantial concessions from China, companies will wonder why Trump took them for a ride. Similarly, if 10% tariffs stay in place, some U.S. companies will continue to be adversely affected. Only big concessions from China will convince them that it's worth enduring that pain.

As it turns out, trade wars are easy to start, but victory is elusive. By playing the long game, China is avoiding outright defeat, while wearing down Trump's patience. Stalemate looks increasingly likely.