The Role of Online Banking in Asia

Over the past 3 years, online banking in Asia has been growing rapidly. A recent survey indicates that the usage of Internet banking has increased by 28% across Asia in the past five years, and the frequency of online banking usage actually surpassed branch banking in 2012, meaning that people in Asia access their account more online today than they do in person.

In the densely populated areas like Singapore, Taiwan, and India, internet banking makes doing your banking less time consuming. Ten years ago, you may have had to wait hours in your bank to do simple transactions; today, customers can pay bills, transfer money, and even purchase investment products online rather than waiting in a crowded line. 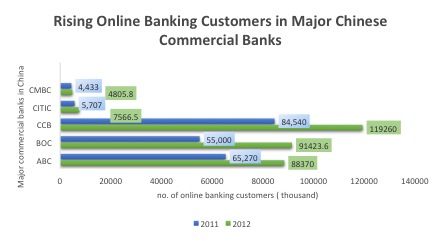 Although internet banking usage in Asia is high overall, individual countries have varied levels of online banking development. Among all the Asian countries, online banking penetration is particularly low in Indonesia, the Philippines, and Vietnam, although there are signs of growth.

Online banking usage has started to grow rapidly in Indonesia since 2010, yet, of the 55 million Internet users, about 25% of the population, only 7% of these internet users actually do online banking, which indicates online banking is still relatively underdeveloped in Indonesia. Enhancements in the mobile online banking platforms including better security and ease of use, may help the industry attract more users and increase market penetration.

With the rapid modernization of companies, infrastructure and overall economies in Asia, Online banking in Asiawill continually show a steady growing trend in the next few years because it plays an important role by sharing the operational burden from branches, and provides more efficient service for customers. The current growing trend also predicts that online banking is slowly making branches less important, and its popularity will increase dramatically in the near future in Asia.

More in this category: « With the Alibaba IPO behind us, what about Yue bao's future? How should China's Online Finance platforms be regulated? »
back to top