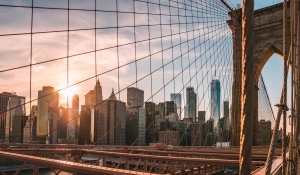 The company says that China's largest banks are all among its customers, along with major Chinese insurers. It total, it claims to have 3,700 customers.

As the FT points out, OneConnect is not alone in choosing to go public in the U.S. An estimated nine Chinese firms filed for a New York IPO in October, among them real estate marketplace FangDD and Canaan Creative, a major global producer of Bitcoin mining materials.

To be sure, political turmoil in Hong Kong is affecting market sentiment. Prior to Alibaba's long awaited secondary share listing, Hong Kong's overall IPO market had been flagging. In the year to late October, it fell 43% year-on-year to $18.5 billion, according to Refinitiv.

Some analysts say that OneConnect is opting for New York because of its maturity compared to Hong Kong. They point to a more predictable listing pace and deeper liquidity.

Data from Dealogic show that IPOs which began trading in New York last year were more likely to be trading above their offer prices a month after debut than those in Hong Kong. 10 of the Nasdaq's 20 largest IPOs did so, as did 16 of the NYSE's, compared to just six of the Hang Seng's, Reuters noted in June.

According to Bloomberg, Hong Kong's largest IPOs of the past two years have largely underwhelmed investors, with share prices falling by 22% on average since listing.

One thing is for certain: OneConnect is going to have to sell U.S. investors a good story. And that could be easier said than done. The company claims a $7.5 billion valuation and raised $750 million in its first funding round, which was led by SoftBank in 2018. But it's also deep in the red. OneConnect's IPO filing shows it lost US$156 million in the year to September 30.

Tags:
More in this category: « Is WeBank the world's top digital bank? China bets big on Africa fintech »
back to top