The PBOC has announced it will be introducing a deposit insurance system in China, which will have a profound impact on banks’  behaviour.  Liberalizing the banking sector may put it on a more sustainable path but short-term risks should not be ignored.

According to the statement from the PBOC all banks will have to set aside a certain amount of capital, which will be aggregated and put into a deposit insurance fund administered by the central bank. The deposit fund will be permitted to invest in government bonds, central bank notes, and highly rated financial bonds. There will be a coverage limit of RMB 500,000, which covers around 99.63% of all banking customers according to end-2013 data. The PBOC released a provisional draft to solicit public opinion and may be implemented as early as the first half of 2015.

Bank insurance schemes are commonplace in most of the world in order to prevent bank runs if customers lose trust in the banks' ability to hold their funds. The bank deposit insurance scheme will certainly instill a much-needed disciplined behavior among potentially higher risk-taking bankers in order to avoid such bankruptcies. Currently, whenever there are signs of banks becoming insolvent the state steps in and bails them out. Due to this implicit government-backed guarantee, banks engage in risky investment and lend to financially substandard borrowers. The Chinese have, with good reason, been more concerned about moral hazard behavior as non-performing loans have been plaguing banks’ balance sheets and are expected to rise further as the Chinese economy slows. With a deposit insurance system, the government hopes to stamp out shadown banking activity, as they no longer will be implicitly guaranteed.

Before these risks become systemic, the Chinese government is willing to give up their oversight and let individual banks carry the burden of risky behavior, while simultaneously securing customers’ deposits.

Deposit insurance is paving the way for the liberalization of deposit interest rates. The Chinese government is expected to let interest rates freely float by 2016, but may delay it further if economic growth doesn’t pick up in the near term. In a free-floating interest rate regime, without such an insurance, banks can easily miscalculate raising interest rates to attract savers, which could make risks associated with non-performing loans become systemic. At least now they will think twice when making a loan to avoid bankruptcy.

The announcement that China is introducing market-oriented deposit insurance scheme confirms President Xi’s broader plan to liberalize the economy and put it on a sustainable path. Beijing will need to keep a close eye on the industry, however, to mitigate any ongoing risks. 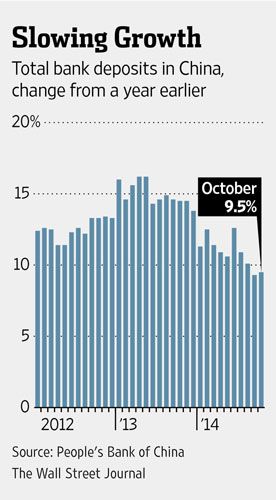 Chart from the WSJ showing deposit growth rate in China.