Shanghai based Lufax, one of China’s biggest P2P platforms, has just received a USD 483 million-worth investment from foreign institutional and private investors. Is the investment rearranging deck-chairs on a sinking ship or a clear signal that everything is fine in the troubled P2P industry?

With nearly 500 million to burn through, it may be a while before we can tell, but Ping An is going all in. The financial conglomerate is a big backer of Lufax and will be integrating its direct loans and credit insurance businesses with the Lufax’s P2P operations. The new entity will be called Puhui Finance and aims to become one of the biggest online consumer finance providers.

Separated from its P2P lending unit, Lufax will become an “open platform” that will distribute information for all market participants, allowing Puhui Finance to channel money between lenders and borrowers. Lufax also has another platform Lfex, which is an institutional investor-oriented informational platform.

The capital comes amid CBRC’s discussions of the P2P sector regulation, though the final rules are yet to be set by the government body. The current thinking is that the basic capital requirement for a P2P platform will be lifted to RMB 30 million. Such a hike will eliminate the smaller competitors and should bring order to the industry. Similar to the payments industry a number of years ago, firms that make it through the consolidation will come out the other side better capitalized and protected from potential disruptors. Hopefully.

The fact that the investment was ex-China hints at Lufax's plans to list internationally. Looking to follow in the footsteps of Lending Club and others, an overseas listing would likely be more probable and better received than listing at home as the P2P as the industry is still perceived by regulators to be risky and the public's view of the industry is mixed. It would also be Lufax’s information platform business and not the P2P platform that would go public. 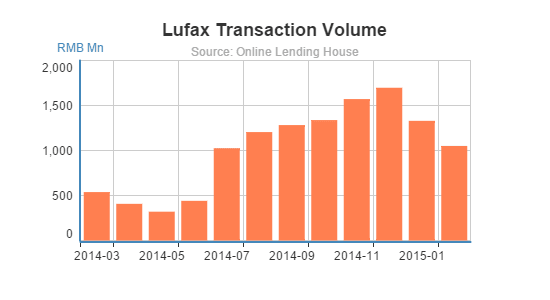 More in this category: « Xiaomi: yet another Chinese tech company moving into online finance China launches deposit insurance »
back to top