October has been a tough month for China's P2P lending platforms as more and more are pressured to shut down due to capital shortages and fraudulent behaviour.

The success of informal P2P lending platforms, brought about by SMEs having little access to funding from the traditional banking system, is taking a turn for the worse as suspected risks are now surfacing. In October, 38 platforms have been shut down, 17 of which people behaved fraudulently (45%) and 11 had capital shortages (29%). 38 shutdowns within one month is a record-high since P2P lending emerged in China. Apart from this being a record high number of P2P platform shutdowns for a one-month timeframe, the high number of shutdowns due to fraudulent behaviour demonstrates how its illegitimacy is posing ever-greater risks for P2P lending businesses. Also, despite the emergence of 72 new platforms in October, 3 of them have already been shut down within the same month.

Such shutdowns do not come as a surprise. Due to lack of regulation in China, P2P lenders conduct proprietary due diligence, which may not reflect the real risk profiles of the borrowers. Much of the fundraising for P2P lending platforms is illegal, which further invites fraudulent behaviour from P2P platform managers. In the face of such shutdowns, therefore, there is very little legal recourse for investors wanting their money back.

This announcement has shed more light on the risky nature of China's P2P lending platforms. While traditional institutions continue to be unable to provide sufficient credit to important parts of the economy, informal lending activities are thriving but now in a much risker environment. Regulators have been hoping to mitigate P2P lending risks through bank privatization schemes but will have to tackle this issue with a more hands-on approach if P2P lending becomes increasingly risky. 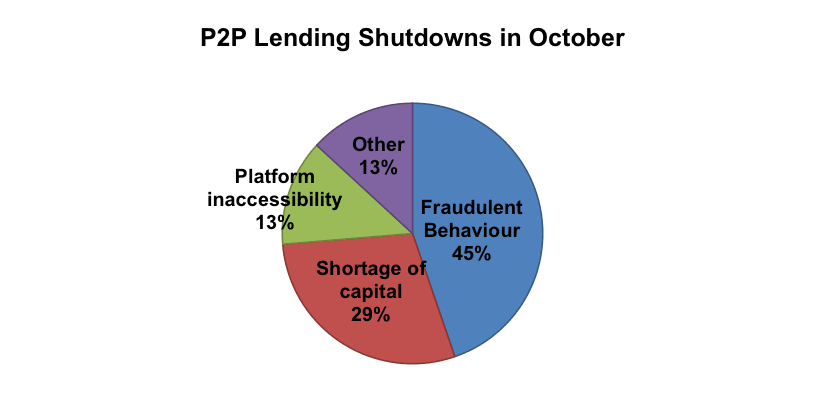 More in this category: « What does an MOU actually mean in China’s financial industry? PBOC drafts outline for long-awaited deposit insurance scheme »
back to top