P2P Lending Models in China Getting a Makeover

China has been at the vanguard lately when it comes to p2p lending, and even though there has been new-found focus on the risk of p2p and the creation of the Fintech Committee meant to regulate Fintech in China, companies keep developing and implementing new models that are cutting edge and in process of revitalizing markets that have barely been touched due to their inherent risk, and in the process of doing so, they have come up with successful business models that have excellent prospects of development.

A recent example of a company that is innovating is 拓道金服(Tuodao Jinfu), which is an online p2p lending company focused on second-hand automobiles based in the cradle of Chinese Fintech, Hangzhou. Tuodao Jinfu has created a lending model that works similar to a traditional p2p platform, but differentiates in that this company had the great idea of installing GPS devices into the automobiles they provide loans for, and creating their own GPS-tracking system. This is in case the loan defaults, they can manage to get the automobile back, dispose of it and get the loan’s principal back. This kind of systems has been seen in the United States before, but not in China, and it has not been seen used by a p2p lending company. The company also has a strategic cooperation with third party companies which help them screen their loan applicants and reduce credit risk.

This model has proved successful as the company has expanded remarkably well, considering that their yearly trade volume has grown as shown in the table below: 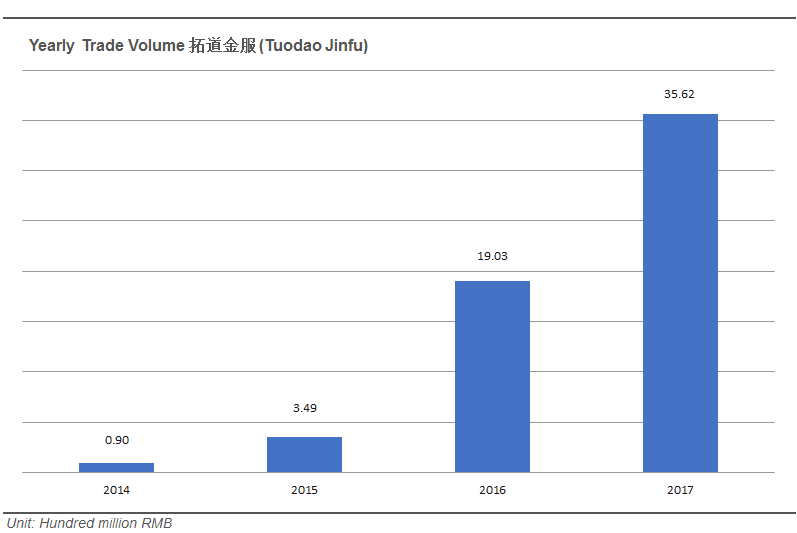 Also, when compared to other p2p lending companies, the company now ranks #49 in the comprehensive p2p lending platform ranking 网贷评级.

Considering that the used-car market has been increasing in size during the last few years, having a successful and mature model as 拓道金服 will put them in an excellent position as they will be able to capture this increasing market. Nonetheless, as they keep developing they will have to face challenges as keeping their borrowers and lenders (investors) base firm, as well as having to face new competitors that try to get into this expanding market.

This company is a good example of how Chinese companies have kept trying to find ways to mitigate risks that are present in p2p lending; credit risk is a type of risk that has been partially solved by their business model, however they will still have to find a way to find a much more inherent risk inherent of p2p platforms as it is capital pool risk and financial risk as it is liquidity risk.

More in this category: « Will Ganzhou's new regulatory sandbox dictate the future of Fintech in China? Wechat's Loan platform is already on-par with some of the biggest banks in China »
back to top