China’s consumer finance industry is booming amid the rising level of consumption among the Chinese Millennials group, a population representing nearly one-third of China’s whole population. The scale of the industry has been pushed to RMB 107.72 billion by total asset value by September last year, almost doubling the scale of RMB 51 billion in 2015.

However, China’s personal loan balance (i.e. short-term loans for personal purchases), net of car and house loans, only represents 4.8% of total loan balance in the country, which indicates an even greater opportunity ahead for consumer finance to grow. The Chinese government has also been playing a supportive role in the industry. By the end of 2016, the China Banking Regulatory Commission (CBRC) had released licenses to a cumulative number of 21 consumer finance companies in the market to develop the consumer finance industry and encourage financial inclusion.

Traditionally, consumer finance refers to the granting of short-term loans to facilitate consumers with the purchase of semi-durable or durable goods. As the market places more emphasis on consumer satisfaction, however, innovation in the sector has led companies to provide more sophisticated consumer finance products and services, covering segments across from electronic products, house appliances, to healthcare, education and pet-care services. Currently, the consumer finance companies in China can be categorized based on three types of business models. They are traditional offline, O2O (online-to-offline) and internet-based. The table below shows a few examples of each type of consumer finance models. 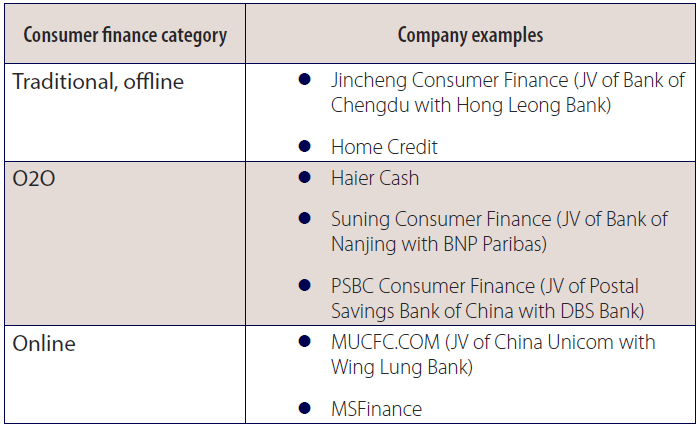 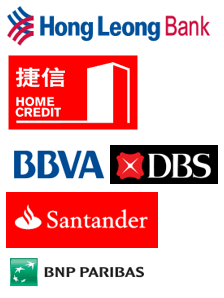 A number of foreign banks are shareholders in these companies, such as Santander, Hong Leong Bank, BNP Paribas, DBS, and BBVA. Here we will talk about Home Credit’s experience in China and will review the other foreign banks business in the upcoming Consumer Finance in China report.

Home Credit, a Czech-based provider of consumer finance founded in 1997, entered the Chinese market in 2010 as one of the first batches of consumer finance companies approved by the CBRC. It is the only consumer finance company in China that is run by 100% a foreign shareholder and is domiciled in Tianjin with the RMB 3.3 billion of registered capital. The company operates with an offline model targeting end-consumers of mainly electronic product and household appliance retailers. Its established retail partnerships include the ones with Huawei Technologies, OPPO Mobile, Suning and many other small- to large-size Chinese brands.

According to Home Credit, a total of 12 million loan contracts were approved during the past year, amounting to a cumulative RMB 49 billion loans released to individual Chinese consumers. As a result, investors are anticipating a further steady growth of the company in the Chinese market in 2017.

As consumption becomes a key diver of the Chinese economy in recent years, Home Credit has made itself engage in several initiatives to promote the development of China’s consumer finance industry. In particular, at the 2016 China-Czech Financial Cooperation Forum jointly organized by the CBRC and Czech National Bank about financial cooperation, trade and investment between the two countries, Home Credit signed a cooperative agreement with the Bank of China.

In October last year, the company also issued a total RMB 1.3 billion worth of asset-backed securities (ABS) into China’s interbank bond market. In one aspect, by doing so, the company would be able to diversify its sources of funding, thereby lowering the cost of financing. This would provide cheaper and greater number of consumer finance services to its customers.

Still, it would be no surprise that the proportion of bad loans and delayed settlements will increase as a result of a lower barrier for customers to obtain loans. In fact, Home Credit has already been facing difficulties collecting loan repayments from customers. Media has reported complaints and controversies regarding the company being ‘aggressive’ when collecting payments from customers who were unable to settle their payments on time. Yet, it is not clear whether the collection rate has been improved or not.

Another challenge facing Home Credit is the rising competition with the small-to-medium consumer finance companies that focus on providing installment payments services in local retail stores. These competitors usually pay a higher rental fee to the retailers to grab market share in offline in-store consumer finance businesses. Furthermore, the regulatory restrictions on P2P lending introduced last year have caused a certain amount of P2P platforms to transform into consumer finance service providers that focus on smaller lending amounts. This may have considerably added competition to the sector. To maintain a competitive edge among its competitors in the market, Home Credit might consider the opportunity to expand its products and services online, as well as improving its risk control system with the more effective use of big data.

More in this category: « Mo’Jie, the Chinese Capricorn who does wealth management A Changing Climate for Banks in China »
back to top