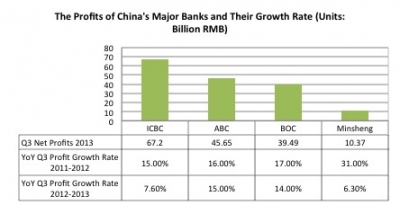 As fixed interest rates in China start to loosen up, banks' bottom lines are starting to feel the pressure. According to the latest figures from China major banks’ annual reports, the net profits of China Mingsheng Banking Corp.(Minsheng), Industrial & Commercial Bank of China Ltd.,(ICBC), Bank of China Ltd. (BOC) and Agricultural Bank of China (ABC) in the third quarter 2013 shrank on a YOY base.

As shown in the graph below, the net profits growth rate of Minsheng, a relatively smaller bank, dropped dramatically almost 25% comparing with the same period last year, likely due to its relatively large interbank business, which was heavily affected by high interest rates in the middle of June. The high interest rates in China also had a big impact on ICBC. The banks' profitability growth rate dropped to around 7.5%. 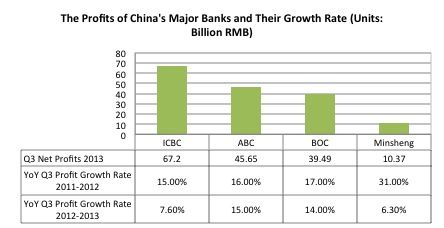 More in this category: « Yuebao, the first decline in AUM. Larger online finance trend? Not really. Liquidity crunch drives up the average WMP yield in Chinese state-owned banks »
back to top