According to the latest figures from Ping An Bank's 2013 Annual Report, demand deposit growth rate dropped dramatically from 25% in 2012 to 11% in 2013. It is estimated that the substantial decrease is due to the impact of money funds such as Yue'Bao. This shift is also relected in the interest payable from customers and interbank deposit growth rate. The figure has increased from 17.93% in 2012 dramatically to 49.33% in 2013.

Among the demand deposits, the influence from money funds on corporates is heavier than on individuals. Corporate demand deposit, taking up 75% of Ping An Bank’s demand deposit in 2013, grew only 7.61%, down almost 18 points than in 2012. Although the individuals are not as sensitive as corporates, we estimate that we will see the same numbers from them soon. 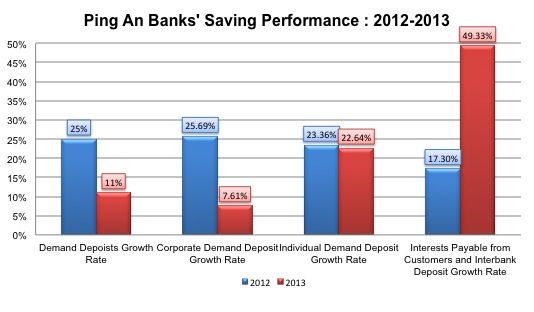 More in this category: « China's smartphone market might be maturing Alibaba continues pressing into banking with a virtual credit card »
back to top